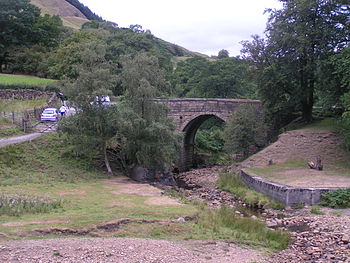 The River Alport flows for five miles in the Dark Peak of the Peak District in Derbyshire. Its source is on Bleaklow, from which it flows south through the Grains in the Water swamp, then over gritstone to Alport Bridge on the A57 Snake Pass route from Sheffield to Manchester, where it joins the River Ashop, which flows into the Ladybower Reservoir about two and a half miles down the valley.

The course of the river includes three small waterfalls. At its southern end lie the remains of a tunnel constructed to carry water to a planned but unbuilt cotton mill. A weir was built on the river in about 1922 and a short watercourse added to feed the water into the Ashop weir located upstream of the confluence. The water was then culverted along the valley to the Ashop Siphon near Hagg Farm, where it then crossed over the River Ashop in a 6-foot diameter steel pipe 273 yards long, passed through a 1,065 yard tunnel under the hill and then by way of another open watercourse of 761 yards to discharge into the Derwent Reservoir a few yards north of the dam wall. The outlet is visible from the viewing area.[1]