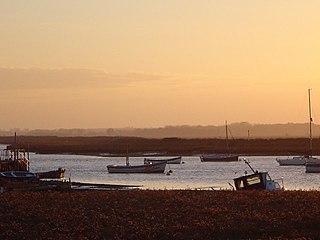 The river at Aldeburgh 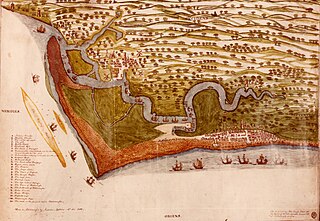 The River Alde is a river in Suffolk, passing by Snape and Aldeburgh. The river nearly emerges on the North Sea at Aldeburgh, but within yards of the beach it is blocked by a shingle bank and flows behind a shingle spit for 10 miles parallel to the coastline, accepting the waters of other streams as it goes. This part of the waterway is known as the River Ore as it broadens and approaches Orford, and aseparates Orford Ness from the mainland. At the end of its course the river empties into the North Sea.

The source of the River Alde is near Laxfield in the same area as the River Blyth. Initially a stream, it becomes tidal and widens considerably when it reaches Snape. It meanders east past Aldeburgh, after which this part of the river was named.[1]

Once the river entered the sea near Orford, but the mouth of the river has now been pushed some five miles further south as longshore drift has pushed the shingle to accumulate over hundreds of years. South or Orford the Ore splits into two channels to form Havergate Island and is joined by its tributary, the Butley River, before reaching the sea at Shingle Street.

During Tudor times, the river served as a port from which four ships were launched to fight against the Spanish Armada.[2] The river no longer serves as a port but as an area for yacht club members to gather to sail.

The River Ore is the name of the final section of the River Alde from just above Orford to the sea. It has one tributary, the Butley River, and Havergate Island is found at their confluence.

The lower reaches of the river passes through marshland and shingle or sand beaches, most of which is now owned by the National Trust.

The shingle spit that blocks the river, Orford Ness, is now some 10 miles in length and is owned by the National Trust,[3] and known as the "Orford Ness National Nature Reserve". Before the National Trust took ownership of this land, it was the site of a secret military base where experimental technologies were tries from 1913 right iup to the Cold War.

[4] The main area through which the River Alde flows is open countryside in private ownership, much of it arable farmland.

The tidal reaches (below Snape Bridge) are within the Suffolk Coast and Heaths Area of Outstanding Natural Beauty, as well as being a Site of Special Scientific Interest,[5][6] a designated Special Area of Conservation[7] and a Special Protection Area.[8]

An RSPB reserve, Boyton Marshes, is situated between the River Ore and the Butley River.

A registered charity, the Alde & Ore Association, exists to "preserve and protect for the public benefit the Alde, Ore and Butley Creek rivers and their banks from Shingle Street to their tidal limits".[9] An area of mudflats 54.4 acres (22.0 ha) in area on the southern side of the river near Iken is managed by the Suffolk Wildlife Trust as a the Alde Mudflats nature reserve.[10]

The novel What I Was by Meg Rosoff is set on the coastline where the River Ore meets the sea.