Aldeburgh is a coastal town in Suffolk, sitting on the River Alde as it spills itself into the North Sea, the town is notable for its shingle beach and fisherman huts where freshly caught fish are sold daily, and the Aldeburgh Yacht Club. The internationally renowned Aldeburgh Festival of arts, which takes place at nearby Snape Maltings, was created in 1948 by the resident and acclaimed composer Benjamin Britten.

A popular weekend destination, particular attractions are the ancient Moot Hall (where the town council still meets), Napoleonic-era Martello tower to the south, sheltered yachting marina at Slaughden, and two family run shops serving fish and chips, one of which is often cited as among the best fish and chip shops in the United Kingdom.[1]

The whole town is within the Suffolk Coast and Heaths "Area of Outstanding Natural Beauty". Just south of the beach at Aldeburgh is Orford Ness, which can be reached by a track leading from Aldeburgh, which is popular with people sea fishing. On the north edge of the town lies the North Warren RSPB reserve an area of wildlife and habitat conservation and nature trails run by the Royal Society for the Protection of Birds.[2]

Alde Burgh means "old fort" although this structure, along with much of the Tudor town, has now been lost to the sea. In the 16th century, Aldeburgh was a leading port, and had a flourishing shipbuilding industry. Sir Francis Drake's ships Greyhound and Pelican (later renamed Golden Hind) were both built in Aldeburgh. The flagship of the Virginia Company, the Sea Venture is believed to have been built there in 1608. When the River Alde silted up and was unable to accommodate larger ships, the area went into decline. Aldeburgh survived principally as a fishing village until the nineteenth century, when it became popular as a seaside resort. Much of its distinctive and whimsical architecture derives from this period. The river is now home to a yacht club and a sailing club. 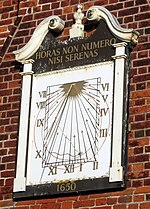 The sundial of the Moot Hall

The Aldeburgh Moot Hall is a Grade I listed timber-framed building which has been used for council meetings for over 400 years. The Town Clerk's office is still there and it also houses the local museum. It was built in about 1520 and altered in 1654. The brick and stone infilling of the ground floor is later. The hall was restored and the external staircase and gable ends were rebuilt in 1854-5, under the direction of Richard Phipson, the chief architect of the Diocese of Norwich, in which Aldeburgh then stood. There are 64 other listed historic buildings and monuments in the town.[3] 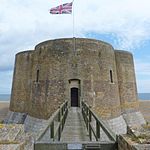 The Martello Tower viewed from across its bridge

A unique quatrefoil Martello Tower stands at the isthmus leading to the Orford Ness shingle spit. It is the largest and northernmost of 103 defensive towers built between 1808 and 1812 to resist a Napoleonic invasion. The Landmark Trust now runs it as holiday apartments.[4]

The Martello Tower is the only surviving building of the fishing village of Slaughden, which had been washed away by the North Sea by 1936. Near the Martello Tower at Slaughden Quay are the barely visible remains of the fishing smack Ionia. It had become stuck in the treacherous mud of the River Alde, and was then used as a houseboat. In 1974 it was burnt, as it had become too unsafe. It is possible to drive beyond the tower but beware of very loose shingle.

A four-storey windmill at the southern end of the town has been converted to residential use. It was built in 1824 and converted into a house in 1902.

On Aldeburgh's beach, a short distance north of the town centre, stands a sculpture, The Scallop, dedicated to Benjamin Britten, who used to walk along the beach in the afternoons. Created from stainless steel by Suffolk-based artist Maggi Hambling, it stands 13 feet high, and was unveiled in November 2003. The piece is made up of two interlocking scallop shells, each broken, the upright shell being pierced with the words: "I hear those voices that will not be drowned", which are taken from Britten's opera Peter Grimes. The sculpture is meant to be enjoyed both visually and tactilely, and people are encouraged to sit on it and watch the sea.

The sculpture is controversial in the local area. Many people consider that it is inappropriate for a man-made object to spoil a beautiful natural setting. It has been attacked with graffiti and paint on a number of occasions, and there have been petitions to have it removed.

The poet George Crabbe was born in Aldeburgh in 1754 and the town forms a loose basis for his poems The Village and The Borough. The latter contains the tale of a fisherman named Peter Grimes, on which Benjamin Britten's opera was based.

Annie Hall Cudlip the novelist was born in Aldeburgh in 1838.

Most famously, Benjamin Britten, the composer, lived in Aldeburgh from 1942. His opera "Peter Grimes" is set in the town; the tale of an Aldeburgh fisherman and tragedy upon the sea. In 1948, along with Eric Crozier and Peter Pears, Britten founded the Aldeburgh Festival. Britten died in Aldeburgh in 1976 and is buried in the churchyard.

Outside the town, the Snape Maltings is the venue for the Aldeburgh Festival held every June.

In Wilkie Collins's novel No Name is an account of Aldeburgh and of its growth as a holiday resort. The town of Aldeburgh or "Owlbarrow" is the setting of a series of children's illustrated books centred on Orlando (The Marmalade Cat) written by Kathleen Hale, who spent holidays in the town. Many of the illustrations in the books feature landmarks in the town, most notably the Moot Hall. The town also features prominently in the thriller Cross of Fire written by novelist Colin Forbes, as well as the nearby villages of Dunwich and Snape Maltings[5]

James Herbert based his book "The Jonah" in the area using several names represented in the local area for characters including Slaughden.

Aldeburgh is also notable for its fish and chip shop. Owned and run by the Cooney family since the 1970s, it has been described in The Times as "possibly the finest on the east coast".

The Suffolk Craft Society hold an annual themed exhibition in the Peter Pears Gallery over July and August. This is the annual showcase for the finest and most recent work made by members.

Aldeburgh Carnival takes place annually in August, with a continuous history dating back to at least 1892 and possibly as far back as 1832 when "Ye Olde Marine Regatta" was mentioned. The focal point of the carnival today is the Carnival Procession featuring locals and visitors dressed in home-made costumes and on floats, often with a topical or local theme. In the evening, a parade with Chinese Lanterns and a firework display are traditional. The Procession has been led for over 30 years by Chief Marshal Trevor Harvey, also a Carnival Committee member for over 50 years.[6]