Havergate Island an island of Suffolk, and the only island of any size on that county's coast.

Havergate Island is not in the open sea but is found between the mainland of Suffolk and Orford Ness, in the estuary of the River Ore at its at the meeting with the Butley River near Orford.

The island is a marshy nature reserve run by the Royal Society for the Protection of Birds and is known for its population of avocets and terns. It is part of the ecologically important Alde-Ore Estuary and has protected conservation status with a wide range of bureaucratic designations; part of a National Nature Reserve, Site of Special Scientific Interest, Special Area of Conservation, Special Protection Area, Ramsar Site and is part of the Suffolk Coast and Heaths Area of Outstanding Natural Beauty.

The island is 2 miles long and half a mile across at its widest point and covers 267 acres. It lies in the Alder & Ore estuary and is protected from the North Sea by the shingle spit of Orford Ness. It is bounded by the river channels known locally as The Gull, Lower Gull and The Narrows.[1]

Havergate Island comprises six salt water lagoons covering 150 acres, surrounded by earthen banks. There are also 100 acres of salt marsh and 10 acres of vegetated shingle.[2] There are also areas of grazing marsh and mud flats, and the site provides important habitat for rare gulls, wading birds and other species.[3]

The island is an important breeding, roosting and feeding site for many migratory and resident bird species. The UK's largest breeding population of pied avocets and Suffolk's only breeding Sandwich terns can be found there.[3][4] Other birds found on the island include oystercatchers, redshanks, ringed plovers, golden plover, dunlin, greenshank and turnstones as well wigeon, pintail and wheatears.[5] The lagoons and marshes make it an important roosting and feeding site .

The Royal Society for the Protection of Birds owns and manages Havergate Island. Active habitat management of the lagoons is employed to benefit the islands breeding and wintering bird populations. Activities include control of water levels and salinity, improving breeding sites, providing increased feeding edges, the creation of deep water refuges for invertebrates and the control of nest predators such as foxes and gulls.[3] Volunteers also help with work on the island including carrying out bird surveying.[2] 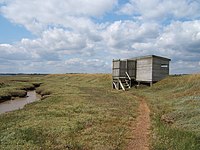 Hide at Dove Point on the southern end of the island

The island and nature reserve is only accessible by boat from Orford quay and only at certain times and dates. Prior booking is required for access, and group bookings can be made. The RSPB charge a fee to enter the nature reserve, with a reduced fee for members. Havergate Island is near to the Suffolk Coast Path, a long-distance footpath, and to Route 1 of the Sustrans National Cycle Network and bus Route 160 from Ipswich to Orford.[13]

Facilities on the island include a number of bird hides, toilets and a picnic area.[6] Guided tours are also available. The site is unsuitable for wheelchair or pushchair users due to the unimproved nature of its paths and boat access.

Havergate Island was first walled for land reclamation around 500 years ago and for much of its history has been used for farming. It was used as arable land and for grazing cattle, and at times for smuggling; the last inhabitants left the island at the end of the 1920s. In the 1930s it was used for summer grazing and in 1933 a gravel company set up shingle extraction on the island but this was found to be unprofitable and they soon left. During the Second World War, the military took control of the island along with Orford Ness. Without human intervention during this time salt water flooded parts of the island making it unsuitable for agricultural use.

In 1947 pied avocets were found on the island, as well as at nearby Minsmere, for the first time in the United Kingdom since they had become extinct over 100 years before. A number of pairs bred that year on Havergate Island and raised 8 chicks between them. Following this discovery the RSPB purchased the island in 1948 and have since managed it for the benefit of birds and the environment.[2][14] 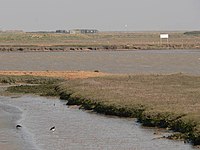 The island from Flybury Point