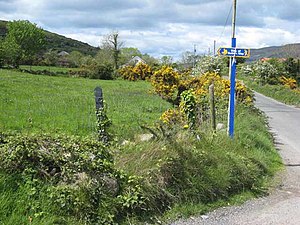 On the Ring of Gullion

The Ring of Gullion Way is a circular footpath in County Armagh; a 37-mile wander into the heart of the Ring of Gullion, the hills in the south of the county. It forms a section of or diversion within the Ulster Way, which circles the province.

The route begins and ends in Newry, heading south from the city past Fathom Mountain to Flagstaff and thence it heads decisively up from the river valley towards the hills. It visits the chambered graves of the Clontygora Court Tomb, and then goes south and up into the Ravendale Forest, and down to the valley of the River Flurry. The route follows up the valley to Flurry Bridge.

Crossing the bridge, the path heads for Jonesborough, which is given a dramatic backdrop in the Jonesborough Mountain; Then through the village south to the Kilsnaggart Pillar Stone (up to the east of the path) and Moyry Castle. The path the zigzags west and touches the border with the Irish Republic and heads straight north to Forkill and on towards Slieve Guillion itself.

The path does not climb Slieve Gullion, but since this is the county top of County Armagh, it is worth a diversion to conquer the hill and gain the fine views to be had from its summit.

The path itself runs up the wooded lower slopes of Slieve Gullion through the Slieve Gullion Forest Park, round the hill and up to the Kilevy Old Churches. From here it runs to Camlough Hill and the Carmough Forest; again, it does not summit the hill. Northward is Derrymore House, an elegant 18th Century thatched cottage built for Issac Corry, Newry's member of the Irish House of Commons for many years, and now in the care of the National Trust.