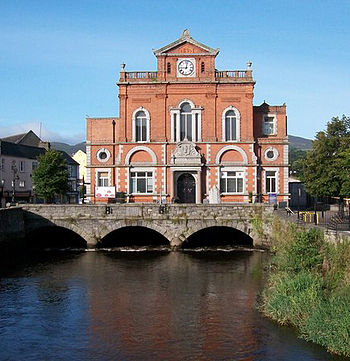 Newry River is the river on which the City of Newry stands, and which in its lower reaches forms the boundary between the Counties of Armagh and Down. Its upper reaches in the tumbing hills below the Mourne Mountains are known as the River Clanrye. The Newry River empties into Carlingford Lough near Warrenpoint.

The names 'Newry River' and 'Clanrye' refer to the same river. Ordnance Survey maps call the river the Clanrye until Sheep Bridge carrying the A1 over the river, and downstream of the bridge to Newry and the Lough it is the 'Newry River'. Not all sources make this distinction.

The word 'Clanrye' comes from the Irish language; An Gleann Rí meaning 'The King's Valley'.

The Clanrye rises in the hills on the north side of the Mourne Mountains in County Down. It meanders genrally westward then southwest to Derryleckagh Bridge at which it makes a dash northward to the A1, where it becomes the Newry River.

The Newry River meanders westward to the broad north-south valley now occupied by the Newry Canal and occupies the valley southwards to Newry, henceforward forming the county boundary with Down to the east and Armagh to the west. At Newry the river famously flows under Newry Town Hall, built on a bridge over the river so that it could be in both of Newry's counties at once.

Below Newry the river is tidal and provides the city's sheltered port. It then emerges in Carlingford Lough.

A legend links the river to St Patrick. It tells that during one of Patrick's exploratory missions he set up camp on a sandy stretch of the Clanrye River. Whilst settling himself there he took the decision to plant a yew tree symbolising Ireland's growing and strengthening faith. It is this story which gave Newry its name, Iúr Cinn Trá: 'the yew tree at the head of the strand' although it must be said that this part of the riverbank does not resemble a beach today. A monastery, later replaced in 1144 by a Cistercian Abbey, grew up around this yew.