Rhydymwyn is a village in Flintshire, located in the upper Alyn valley. Once a district of Mold, it was recognised as a separate ecclesiastical parish from 1865. The name in the Welsh language means 'Ford of the Ore' and it takes its placename from the ford across the River Alyn, now replaced by a small iron bridge.

The geology of the area consists of a layer of extremely pure, and hence structurally sound, 200-foot-thick layer of limestone at depths ranging from surface to 900 feet.[1] The limestone holds other minerals, including copper, nickel and copper deposits, making it an ideal site for mining.

Due to the industrialisation of nearby Cheshire and Lancashire, and its needs for mineral supplies, the mineral deposits in the Alyn valley created a population explosion in various villages, including Rhydymwyn. From the mid-18th century, Rhydymwyn was the site for a range of industries, which included foundries, waterwheels as well as mine workings.[2] 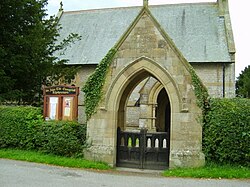 The Parish Church of St John the Evangelist Rhydymwyn

The Denbigh and Mold Junction Railway had a Rhydymwyn station on the south side of the A541 road, which opened on 6 September 1869.[5] The station closed to passengers on 30 April 1962 and completely from 4 May 1964. The former station building is now a private house.[6]

Approximately a mile from Rhydymwyn is the small hamlet of Hendre. Along the main road from the old Sardis Chapel, and only a few feet from the edge of the A541 there is an ancient well - Ffynnon leinw - (leinw comes from the Welsh word "llanw" meaning tide as it is reported that the water in the well rose and ebbed with the tides of the Dee Estuary). The well has been listed as one of the holy wells of Wales on a par with the more famous St Winefride's Well in Holywell. The well in Hendre is mentioned by Thomas Pennant in his 'A Tour in Wales' - written between 1778–1783 and also by Giraldus Cambrensis or Gerald of Wales in his 'Journey through Wales' written in 1188 - an itinerary of his journeys as he accompanied Archbishop Baldwin of Exeter to enlist support for the Third Crusade.

The Plaque to Mendelssohn and Charles Kingsley in Rhydymwyn

The famous German composer Felix Mendelssohn Bartholdy composed The Rivulet in 1829 while visiting his father's friend John Taylor (himself a famous mining engineer and entrepreneur) and his family in 1829 who rented Coed Du. This work was inspired by the beauty of the countryside. During the same visit, Mendelssohn composed his operetta Son and Stranger.[7]

Charles Kingsley, author of The Water-Babies, A Fairy Tale for a Land Baby, also came and walked the Leete; both his and Mendelssohn's visits are commemorated by a plaque in Nant Alyn Road, Rhydymwyn.

In the autumn of 2000, local rainfall was exceptional in terms of intensity and duration. Between 28 October and 6 November, 68 homes and 8 businesses flooded in Rhydymwyn because of overflow from the River Alyn. In 2002 and 2003, DEFRA's internal team in two phases created a flood alarm and protection scheme to protect the whole village and Valley Works, with a level of protection in excess of a flood with a 1% chance of occurring in any one year. The total cost for the scheme was £88,000.[8]