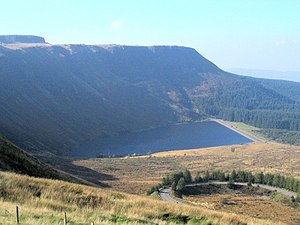 Rhigos is a village in the north of the Cynon Valley in Glamorgan. The population at the 2011 census was 894.[1] For postal purposes it comes under the town of Aberdare, which is seven miles to the east. Glyn Neath lies two miles to the west.

Rhigos lies at the apex of the Cynon Valley and the Vale of Neath. The village lies just off the old Aberdare road that was the main link between Aberdare and Glyn Neath before the A465 road was extended. The hamlets of Cefn Rhigos and Cwm-Hwnt lie to the west of the main village.

The name Rhigos is an adaptation of the Welsh-language Y Rugos (y & grug & collective suffix -os) meaning "the heath". Originally farmland until the late 1700s, the village developed in the Industrial Revolution through the mineral industry, extracting coal, iron ore and limestone.

The first development was at the British Rhondda Colliery, later called "The Pandy" and finally Rhigos Colliery. A drift mine, it closed in 1965.[2] In the 1960s opencast mining took over the surrounding countryside. Firms such as Wimpey, Taylor Woodrow and Parkinsons, bought up the farmland in the area providing a lot of work but at the cost of environmental damage to the landscape. The surrounding area has now returned to green fields. The Tower Colliery, located on Craig y Llyn, was famously the subject of a worker's buy-out and eventually closed in 2008. The closure of Tower saw the last of the deep mines in Wales come to an end.

The Crawshays developed Hirwaun Ironworks on land between the village and Hirwaun, which provided much employment until the early 1830s. In 1910, the site was taken over by the Gloucester Railway Carriage and Wagon Company.

During the Second World War, those not within the colliery industry, and hence in reserved employment, could find similar work at ROF Hirwaun, which was actually sited within Rhigos parish. Developed by the Ministry of War from 1942 as an offshoot of ROF Newport, it was an engineering ROF producing .303 cartridge cases for Lee–Enfield rifles, and 9mm cartridge cases, which were then shipped to be filled at a Filling ROF. Having built three new roads and associated bungalows to house the workers, all raw materials were shipped in via the former Vale of Neath Railway, using the sidings of the former Tir Herbert brickworks. Day-workers would alight at Rhigos railway station, beyond which were built additional sidings to house the railway carriages that were shipping workers to the site from all over the South Wales valleys. The site of the ROF was discovered by the German military, who ordered a single air raid by the Nazi Luftwaffe in 1943. At the end of the war, the site was abandoned, and the factory was only demolished in the late 1960s.

There is a newsagent and two pubs located within Rhigos: "The Plough" and "The New Inn". There is a small school, Rhigos Primary, built in the Victorian style in 1876. Prior to the building of the school classes were held in rooms provided by R Crawshay esq, first mentioned in the journals of William Roberts (Nefyed) in 1856. He states how the school was funded by the colliers and miners of Rhigos, who each contributed 1d of each pound of their wages to support a master whose salary was £40.

One of the village's social hubs is the Rhigos RFC club house. Rhigos Sports Hall is a volunteer-run facility, and is located adjacent to the rugby club. It provides a range of indoor sporting facilities to Rhigos and the surrounding areas.

The Vale of Neath Gliding Club operates from a grass airfield close to the village.[3]

The village lies on the old Aberdare road, that was the main link between Aberdare and Glyn Neath.

In 1850 the Vale of Neath Railway opened its line between Neath and Aberdare via Hirwaun, completing its main line to Merthyr Tydfil from Hirwaun in 1853. Rhigos Halt consisted of two platforms and was sited at the north end of the 520-yard-long Pencaedrain Tunnel. Brown's engineering sidings were additionally built to house permanent way vehicles that were maintaining the railway tracks. The climb from Glynneath to Rhigos involved the steep Glynneath embankment, which required all north-bound trains to take on a banker locomotive at Glynneath station, which was released at Rhigos.

After the railway was closed under the Beeching Axe, the council took the opportunity to provide a better road link between Hirwaun and Glynneath, and so bypassed the old Aberdare road by building an extension to the A465 road which utilised most of the trackbed of the abandoned railway.

Rhigos has produced several international rugby players, most notably Dai Morris, who played for Wales as a flanker during the "Second Golden Era" of Welsh rugby in the 1970s, and dual rugby union/rugby league international Glyn Shaw.