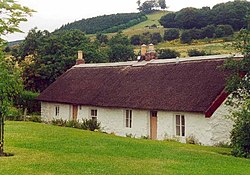 Rait is a small village in the parish of Kilspindie, Perthshire. It lies some two and a half miles north-west of Errol, in the Gowrie district of the county. The former parish church, now ruined, was built in the Middle Ages, and abandoned in the 17th century when the parish of Rait was merged with that of Kilspindie.[1] The remains of a prehistoric promontory fort lie to the east of the village.[2] The 16th-century Fingask Castle is located to the north of the village, on the south-facing slopes of the Sidlaw Hills.[3]