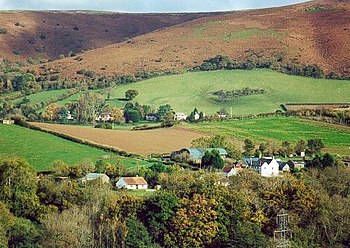 Newton, Bicknoller and the Quantock Hills

The Quantock Hills is a range of low hills west of Bridgwater in Somerset: though much of the land on the hills is of modest height, the Quantocks tower over the flat, sea-level land of the Somerset Levels.

The hills run from the Vale of Taunton Deane in the south, for about fifteen miles to the north-west, meeting the sea at East Quantoxhead and West Quantoxhead, on the coast of the Bristol Channel.

North and east of the hills the Somerset Levels spread out, of which the scarp of the Quantock Hills forms a boundary wall. The part of the levels lapping agains the hills here is Sedgemoor.

From the top of the hills on a clear day, it is possible to see Glastonbury Tor and the Mendips to the east, Wales as far as the Gower Peninsula to the north, the Brendon Hills and Exmoor to the west, and the Blackdown Hills to the south. The highest point on the Quantocks is Wills Neck, at 1,261 feet.[1]

Soil types and weather combine to support the hills' plants and animals. The Quantock Hills are covered in heathland, oak woodlands, ancient parklands and agricultural land, and dotted with pretty villages.

The traces of many ages of man have been found on these hills: Mesolithic flints, Bronze Age round barrows and Iron Age hill forts remain from the early ages. Roman silver coins have been discovered in West Bagborough. In the later Saxon period, King Alfred led the resistance to Viking invasion, and Watchet was plundered by Danes in 987 and 997. The hills were fought over during the Civil War and Monmouth Rebellion.

Now though the hills are a peaceful downland popular with walkers, mountain bikers, horse riders and tourists. There are many sights to see amongst the villages.

The Coleridge Way has been created along the hills, a waymarked path inspired by the walks taken by the poet Samuel Taylor Coleridge, who lived in Nether Stowey from 1797 to 1799.

The name of the Quantocks first appears in Anglo-Saxons charters in around the year 880 as Cantuctun and two centuries later in the Domesday Book as Cantoctona and Cantetone. The name means settlement by a rim or circle of hills;[2] Cantuc is a Brtish language word for a rim or circle, while -ton (or originally -tun) is Old English for a village or estate.

Beach at Quantoxhead, with exposed strata

The Quantock Hills are largely formed by sedimentary rocks of the Devonian period. In the higher north-western areas older Early Devonian rocks known as Hangman Grits (or, more formally, the Hangman Sandstone Formation) predominate[2] and can be seen in the exposed rock at West Quantoxhead quarry, which was worked for road building.[3] The Hangman Grits are described in three divisions: the lowest are the Little Quantock Beds, which are located near Crowcombe, and made up of siltstones and slates. Between Triscombe and West Quantoxhead is a layer of the Triscombe Beds which is around 1,600 feet thick and is made up of green sandstone and mudstones. The uppermost division is the Hodders Combe Beds of sandstone and conglomerate and is approximately 1,000 feet thick.[4]

Further south there are newer Middle and Late Devonian rocks, known as Ilfracombe beds and Morte Slates.[3] These include sandstone and limestone, which have been quarried near Aisholt. At Great Holwell, south of Aisholt, is the only limestone cave in the Devonian limestone of North Devon and West Somerset.[3] The lower fringes around the hills are composed of younger New Red Sandstone rocks of the Triassic period.[5] These rocks were laid down in a shallow sea and often contain irregular masses or veins of gypsum, which was mined on the foreshore at Watchet.[3]

Several areas have outcrops of slates. Younger rocks of the Jurassic period can be found between St Audries and Kilve.

Kilve has the remains of a red-brick retort built in 1924 after the shale in the cliffs was found to be rich in oil. Along this coast, the cliffs are layered with compressed strata of oil-bearing shale and blue, yellow and brown lias embedded with fossils. The Shaline Company was founded in 1924 to exploit these strata but was unable to raise sufficient capital. The company's retort house is thought to be the first structure erected here for the conversion of shale to oil and is all that remains of the anticipated Somerset oil boom.[6]

At Blue Anchor the coloured alabaster found in the cliffs gave rise to the name of the colour "Watchet Blue".[1] The village has the only updraught brick kiln known to have survived in Somerset. It was built around 1830 and was supplied by small vessels carrying limestone to the small landing jetty.[7] Now used as a garage, the kiln is thought to have operated until the 1870s, when the large-scale production of bricks in Bridgwater rendered small brickyards uneconomic.[8]

Cockercombe tuff is a greenish-grey, hard sedimentary rock formed by the compression of volcanic ash and is found almost exclusively in the south-eastern end of the Quantock Hills.

The Quantocks were the first declated ‘Area of Outstanding Natural Beauty’, being designated in 1956,[9] and

Designations attaching to the hills include:

The streams and open water such as Hawkridge Reservoir and Ashford Reservoir on Cannington Brook also provide habitats for a range of species. 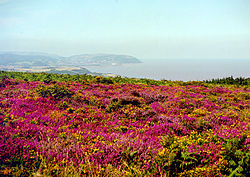 On the northern flank of Beacon Hill

The hilltops are covered in heathland of gorse, heather, bracken and thorn with plantations of conifer. The western side of the Quantocks are steep scarp]] slopes of pasture, woods and parkland. Deep stream-cut combes]] to the north-east contain extensive oak-woods with small flower-rich bogs above them. The areas where there is limited drainage are dominated by heather (Calluna vulgaris), with significant populations of cross-leaved heath (Erica tetralix), purple moor-grass (Molinia caerulea), bilberry (Vaccinium myrtillus) and wavy hair-grass (Deschampsia flexuosa). Drier areas are covered with bell heather (Erica cinerea), western gorse (Ulex gallii) and bristle bent (Agrostis curtisii), while bracken (Pteridium aquilinum) is common on well-drained deeper soils. The springs and streams provide a specialist environment that supports bog pimpernel (Anagallis tenella). The woodland is generally birch/sessile oak woodland, valley alder woodland and ash/wych elm woodland, which support a rich lichen flora. Alfoxton Wood is one of only three British locations where the lichen Tomasellia lectea is present.[11]

Samuel Taylor Coleridge, the poet, lived in Nether Stowey in the Quantocks from 1797 to 1799. In his memory a footpath, The Coleridge Way, was set up by the Exmoor park authorities. The route is 36 miles long, beginning in Nether Stowey. From here it crosses the Quantocks, the Brendon Hills and Exmoor before finishing in Porlock.[12] (Coleridge reports that Kubilai Khan came to him in a dream, and when he awoke he immediately started to write it down, but interrupted by a man from Porlock, who detained him for so long that he had completely forgotten the rest of the poem.)

The Quantock Greenway is a footpath that opened in 2001. The route of the path follows a figure of eight centred on Triscombe. The northern loop, taking in Crowcombe and Holford, is 19 miles long, and the southern loop to Broomfield extends for 18 miles. The path travels through many types of landscape, including deciduous and coniferous woodland, private parkland, grazed pasture and cropped fields.[13]

In culture and literature 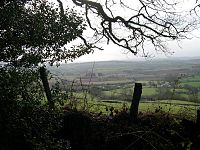 Wooded hillside in the Quantocks

Coleridge Cottage stands in Nether Stowey. The cottage was built in the 17th century as a building containing a parlour, kitchen and service room on the ground floor and three corresponding bed chambers above.[14] It has been designated by English Heritage as a grade II* listed building.[15]

Having served for many years as Moore's Coleridge Cottage Inn, the building was acquired for the nation in 1908, and the following year it was handed over to the National Trust.[16] On 23 May 1998, following a £25,000 appeal by the Friends of Coleridge and the National Trust, two further rooms on the first floor were officially opened by William Coleridge, 5th Baron Coleridge.

At Aley is Quantock Lodge, a green-grey 19th-century mansion built from cockercombe tuff. It was the family home of Henry Labouchere, 1st Baron Taunton, until the 1960s when it was converted into a school. In 2000, it became a centre for recreation and banqueting and summer camps for youths.

At Broomfield is Fyne Court, originally the pleasure grounds of pioneer 19th century electrician, Andrew Crosse. Since 1972 it has been owned by the National Trust, and has been leased from them to the Somerset Wildlife Trustto be run as a nature reserve. 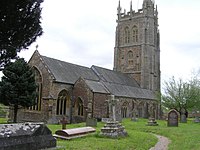 The Church of St Mary in Kingston St Mary dates from the 13th century, but the tower is from the early 16th century and was re-roofed in 1952, with further restoration from 1976 to 1978. It is a three-stage crenellated tower, with crocketed pinnacles, bracketed pinnacles set at angles, decorative pierced merlons, and set-back buttresses crowned with pinnacles.[20] The decorative "hunky-punks" are perched high on the corners. These may be so named because the carvings are hunkering (squatting) and are "punch" (short and thick). They serve no function.

Nearby is Hestercombe House, a country house in Cheddon Fitzpaine visited by about 70,000 people per year. The site includes a small 'Site of Special Scientific Interest' and a 'Special Area of Conservation'.[21] The house was used as the headquarters of the British 8th Corps[22] during the Second World War.

The Norman Church of St Giles in Thurloxton dates from the 14th century but is predominantly from the 15th century with 19th century restoration, including the addition of the north aisle in 1868.[23]

The West Somerset Railway is a heritage railway that runs along the edge of the Quantock Hills between Bishops Lydeard and Watchet. The line then turns inland to Washford, and returns to the coast for the run to Minehead. At 23 miles, it is the longest privately owned passenger rail line in the United Kingdom.[24]

Halsway Manor in Halsway, is now used as the 'National Centre for Traditional Music, Dance and Song'; the only residential folk centre in Britain. The eastern end of the building dates from the 15th century and the western end was a 19th-century addition.[25] The manor, which is mentioned in the Domesday Book, was at one time used by Cardinal Beaufort as a hunting lodge. It was a family home until the mid-1960s when it became the folk music centre. It is Grade II* listed.[26]

Halswell House in Goathurst has Tudor origins but was purchased by the Tynte family and rebuilt in 1689.[3] The surrounding park and 17-acre pleasure garden was developed between 1745 and 1785. The grounds contain many fish ponds, cascades, bridges and fanciful buildings,[27] including the 'Temple of Harmony', which stands in Mill Wood[28] and has now been fully restored.