Glastonbury Tor is a remarkable hill by Glastonbury in Somerset; a steep, solitary hill rising to 518 feet out of the flat, once flooded, lands of the Somerset Levels. It is topped by a roofless tower built as a chapel, St Michael's Tower.

The hill belongs today to the National Trust.

The Tor is a conical hill of clay and Blue Lias rising from the Somerset Levels. Its anomalous appearance is all in the geology: surrounding softer deposits were eroded over the ages, leaving the hard cap of sandstone exposed. The slopes of the hill are terraced, apparanetly for mediæval farming, but the method by which they were formed remains unexplained. Signs of the hand of man on the hill are found from many ages, from the Iron Age and Roman eras to modernity.

The Tor has assumed a place in Arthurian mythology and the modern mythology of neo-Paganism, which has become prevalent around Glastonbury.

Several buildings were built on the summit during the Saxon and early mediæval periods; they have been interpreted as an early church and monks' hermitage. The original wooden church was destroyed by an earthquake in 1275, and the stone Church of St Michael built on the site in the 14th century. Its tower remains, although it has been restored and partially rebuilt several times.

St Michael's Tower is a Grade I listed building[1] and has been designated a scheduled monument.[2][3]

Archaeological excavations during the 20th century sought to clarify the background of the monument and church, but some aspects of their history remain unexplained. 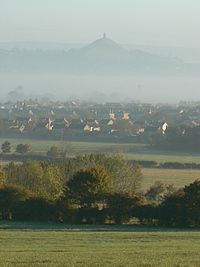 Street and Glastonbury Tor viewed, above the mist, from Walton Hill

The Tor is in the middle of the Summerland Meadows, part of the Somerset Levels,[4] rising to an elevation of 518 feet.[2] The plain is reclaimed fen above which the Tor is clearly visible for miles around. It has been described as an island but actually sits at the western end of a peninsula washed on three sides by the River Brue.[5]

The Tor is formed from rocks dating from the early Jurassic Period, namely varied layers of Lias Group strata. The uppermost of these, forming the Tor itself, are a succession of rocks assigned to the Bridport Sand Formation. These rocks sit upon strata forming the broader hill on which the Tor stands; the various layers of the Beacon Limestone Formation and the Dyrham Formation.[6][7] The Bridport Sands have acted as a caprock protecting the lower layers from erosion. The iron-rich waters of Chalice Well, a spring at the base of the Tor, flow out as an artesian well impregnating the sandstone around it with iron oxides that have reinforced it to produce the caprock.[8] Iron-rich but oxygen-poor water in the aquifer carries dissolved iron (II) "ferrous" iron, but as the water surfaces and its oxygen content rises, the oxidised iron (III) "ferric" iron drops out as insoluble "rusty" oxides that bind to the surrounding stone, hardening it.[9]

The low-lying damp ground can produce a visual effect romantically known as a 'Fata Morgana' when the Tor appears to rise out of the mist.[10] This optical phenomenon occurs because rays of light are strongly bent when they pass through air layers of different temperatures in a steep thermal inversion where an atmospheric duct has formed.[11] The Italian term Fata Morgana is derived from the name of Morgan le Fay, a powerful sorceress in Arthurian legend.[12]

Terraces on the Tor

The sides of the Tor have seven deep, roughly symmetrical terraces. Their formation remains a mystery[3] with many possible explanations. They may have been formed as a result of natural differentiation of the layers of Lias stone and clay used by farmers during the Middle Ages as terraced hills for agriculture.[13] 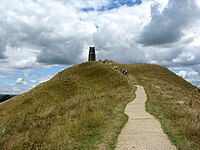 The last few yards' walk up the Tor

Other explanations have been suggested for the terraces, including the construction of defensive ramparts.[14] Iron Age hill forts including the nearby Cadbury Castle in Somerset show evidence of extensive fortification of their slopes. The normal form of ramparts is a bank and ditch, but there is no evidence of this arrangement on the Tor. South Cadbury, one of the most extensively fortified places in early Britain, had three concentric rings of banks and ditches supporting an 44-acre enclosure. By contrast, the Tor has seven rings and very little space on top for the safekeeping of a community.[15] The historian Ronald Hutton suggests that the terraces are the remains of a mediæval "spiral walkway" created for pilgrims to reach the church on the summit,[16] similar to that at Whitby Abbey.[17]

There is no evidence of permanent occupation of the Tor in an early age, but finds, including Roman pottery, do suggest that it was visited on a regular basis.[18]

Excavations between 1964 and 1966,[19] revealed evidence of Dark Age occupation during the 5th to 7th centuries[2][20] around the later mediæval church of St. Michael. Finds included postholes, two hearths including a metalworker's forge, two burials oriented north-south (thus unlikely to be Christian), fragments of 6th-century Mediterranean amphorae (vases for wine or cooking oil),[21] and a worn hollow bronze head which may have topped a Saxon staff.[22][23][24] 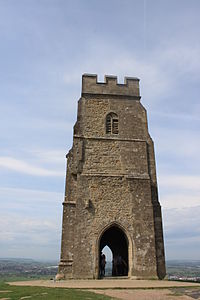 During the late Saxon and early mediæval period there were at least four buildings on the summit. The base of a stone cross demonstrates Christian use of the site during this period and it may have been a hermitage.[25] The broken head of a Sun cross|wheel cross dated to the 10th or 11th centuries was found part way down the hill and may have been the head of the cross that stood on the summit.[26][27][28] The head of the cross is now in the Museum of Somerset in Taunton.[29]

The earliest timber church, which was dedicated to St Michael,[30] is believed to have been constructed in the 11th or 12th century from which post holes have since been identified.[31][32] Associated monk cells have also been identified.[32]

St Michael's Church was destroyed by an earthquake on 11 September 1275.[33] According to the British Geological Survey, the earthquake was felt in London, Canterbury and Wales,[34] and was reported to have destroyed many houses and churches in England. The force was greater than 7  MSK, with its epicentre in the area around Portsmouth or Chichester.[33]

A second church, also dedicated to St Michael, was built of local sandstone in the 14th century by the Abbot Adam of Sodbury, incorporating the foundations of the previous building. It included stained glass and decorated floor tiles. There was also a portable altar of Purbeck Marble;[35] it is likely that the Monastery of St Michael on the Tor was a daughter house of Glastonbury Abbey. In 1243 Henry III granted a charter for a six-day fair at the site.[36]

St Michael's Church survived until the Dissolution of the Monasteries in 1539 when, except for the tower, it was demolished.[2] The last Abbot of Glastonbury, Richard Whiting, was hanged, drawn and quartered on the Tor for treason, along with two of his monks, John Thorne and Roger James.[37] The three-storey tower of St Michael's Church survives. It has corner buttresses and perpendicular bell openings. There is a sculptured tablet with an image of an eagle below the parapet.[1]

In 1786, Richard Colt Hoare of Stourhead bought the Tor and funded repair of the tower in 1804, including the rebuilding of the north-east corner.[2][38] It was then passed on through several generations to the Reverend George Neville and included in the Butleigh Manor until the 20th century. In was then bought as a memorial to a former Dean of Wells, Thomas Jex-Blake, who died in 1915.[39]

The National Trust took control of the Tor in 1933, but repairs were delayed until after Second World War.[38] During the 1960s, excavations identified cracks in the rock, suggesting the ground had moved in the past. This, combined with wind erosion, started to expose the footings of the tower, which were repaired with concrete. Erosion caused by the feet of the increasing number of visitors was also a problem and paths were laid to enable them to reach the summit without damaging the terraces. After 2000, enhancements to the access and repairs to the tower, including rebuilding of the parapet, were carried out. These included the replacement of some of the masonry damaged by earlier repairs with new stone from the Hadspen Quarry.[38]

A model of Glastonbury Tor was incorporated into the opening ceremony of the 2012 Summer Olympics in London. As the athletes entered the stadium, their flags were displayed on the terraces of the model.[40][41][42]

The Tor has attracted a great deal of interest both from roamanticisers of Arthurian legend and form modern neo-pagans. It has been claimed as the "The Isle of Avalon" and the 12th and 13th-century writer Gerald of Wales asserted it to be so.[43] The Tor has therefore long been been associated with the name Avalon, and identified with King Arthur. This has ben particularly oso since the alleged discovery of King Arthur's and Queen Guinevere's neatly labelled coffins in 1191, recounted by Gerald of Wales.[44][45]

With the 19th-century resurgence of interest in Celtic mythology, the Tor became associated with Gwyn ap Nudd, the first Lord of the Otherworld (Annwn) and later King of the Fairies.[46][47] The Tor came to be represented as an entrance to Annwn or to Avalon, the land of the fairies.[48]