Priestlaw is a hill on Lammermuir and also the name of the hamlet at its foot.

Priestlaw Hill stands in East Lothian, close by the border with Berwickshire, on that high ridge between the two shires; a little to the west is Meikle Says Law, on which are the highest points of both counties. Priestlaw itself rises to 1,404 feet above sea level.

The hill is a mass of granite, enveloped in a heather-clad, rounded hill, topped with a cairn. It stands south of the Whiteadder Water, whose tributaries, the Faseny Water and Killmade Burn, run either side of the hill down to the Whiteadder. The Whiteadder Reservoir fills the dale here between the two streams.

The hamlet of Priestlaw stands below Priestlaw Hill at NT649633, where the Faseny Water runs into the Whiteadder Reservoir. 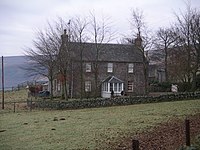