Prestbury is a village in Cheshire. The parish of Prestbury is a long, narrow parish covering 2,879 acres to the west of the Peak Park foothills and to the east of the sandstone ridge which is ‘the edge’. The village is about a mile and a half north of Macclesfield.

The village is a commuter village for nearby Manchester and the towns round about, and is one of the most sought after and expensive places to live outside of London. Prestbury is a frequent winner of Best Kept Village/Community Pride Competitions, and a popular destination for sightseers.[1]

The name 'Prestbury' is Old English, and may be from Preosta burh ('Priests' Town / Borough') or Preosta beorg ('Priests' Hill').

Prestbury lies between Macclesfield and Wilmslow, for the most part on elevated ground above the flood-prone River Bollin. The ancient Forest of Macclesfield is to the east.

There is no evidence of a settlement before Anglo-Saxon times, although a cemetery nearby which had been excavated in 1808 contained pottery cremation urns and signs of sacrifice and was presumably pre-Christian.

At the time of the Norman conquest, the parish consisted of thirty-five townships:

Prestbury township was not mentioned in the Domesday Book, perhaps because information was not supplied or because Prestbury was only a church, not a manor.

The church administered the civil as well as ecclesiastical affairs of the parish until the Local Government Act 1894 created rural districts and civil parishes. Three of the townships, Butley, Fallibroome and Prestbury, constitute the present civil parish of Prestbury.

The school, smithies, the mill, inns and the stocks centre on a village street called "The Village", which is broad enough for cattle fairs and the like. Until the 19th century the village street was connected to Pearl Street, the main street of Butley, by a ford.

In about 1825, a bridge of two arches was built, linking the village street to a new road ("New Road") passing behind the cottages and the Admiral Rodney pub[2] on the southeast side of Pearl Street. In 1855 the bridge was replaced by the present bridge with one arch.[3]

During the 19th century Prestbury became involved in the silk industry. Swanwick's factory operated and cottages were built for the workers ("Factory Cottages" or "Irish Row"). Weavers' cottages were built on both New Road and the Village[4] with upper storeys for weaving.

In the 20th century, improved communications made it possible for Prestbury to develop into a residential community.

The Village, northwest side

The Conservation Area includes areas neighbouring the village street, the east side of Macclesfield Road as far south as the Methodist Church,[6] and New Road as far north as Butley Cottage[7] and its garden. 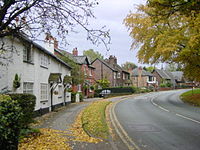 Many of the buildings and structures in the Conservation Area are listed by English Heritage, four of them, Bridge Hotel,[8] Priest's House,[9] Horner's[10] and Prestbury Hall[11] being regarded as "Focal Buildings". Other buildings are considered to be of townscape merit. Trees and even some hedges are important landscape features.

Brooks Cottages,[13] marked with a plaque reading "Rodger Brooks and Ellen his wife erected this house in the 24 years of his life Ano Dom 1686" are among the listed buildings on the Butley side of the Bollin.

Smithy Cottage, built on the site of a former smithy, is just outside the conservation area.

Butley Hall[14] is shown on the 1831 map but is outside the Conservation area, as are the Butley Ash Inn and Spittle House, which was probably built between 1300 and 1450 as a leper hospital.

New estates were built during the 20th century to accommodate commuters.

The defining characteristic of 21st century development has been the replacement of quite sizeable houses by large mansions, such as that built for Wayne Rooney.[15]

Adlington Hall[16] with strong connections with Prestbury is nearby.

The village has a Queen Elizabeth II Field.