Pitzhanger Manor is a late Georgian country house in Pitshanger Village (by Ealing) in Middlesex. It stands today in Walpole Park on Mattock Lane, now embedded within the conurbation, but in its day the house was a country retreat.

The house was owned from 1800 to 1810 by the architect John Soane, who radically rebuilt it. Soane intended it as a country villa for entertaining and eventually for passing to his elder son. He demolished most of the existing building except the two-storey south wing built in 1768 by George Dance the Younger, who had been his first employer. Soane is chiefly responsible too for the unusual name: it was formerly 'Pits Hanger' and the spelling with a 'Z' may be an affectation.

In the late twentieth century, an extensive restoration returned much of the building back to Soane's design.

The house is a Grade I listed building.[1]

The house is now opened as a museum and art gallery, as a showcase of Soane's design, and also serves as a venue to hosts exhibitions and events.

Until the eighteenth century

A large house has stood on the site at least since the late seventeenth century, at which time the smaller Pitzhanger Manor (variously spelled) stood a mile or so to its north.

Between 1664 and 1674 it is recorded that Richard Slaney paid hearth tax on a building on the site of the present-day Pitzhanger Manor for 16 hearths. This provides a rough indication of the (considerable) size of the property as it then was.

In 1711, the occupants John and Mary Wilmer gave away their eldest daughter Grizell to be married to Jonathan (sic) Gurnell. He went on to make his fortune, first as a merchant and later as a co-founder of the city bank Gurnell, Hoare, and Harman. Through this marriage the house passed to his only surviving son Thomas Gurnell, who bought Pits Hanger Manor Farm (sometimes spelt Pitts Hanger on old maps) in 1765.[2] With the plainer 'manor house' of Pits Hanger (Farm) Manor standing near the centre of the modern Meadvale Road in the present suburb of Pitshanger (often referred to locally as Pitshanger Village), his grander existing house, a mile to the south in Ealing, became known as Pitshanger Place.[3][4]

On the death of Thomas Gurnell, his son Johnathan inherited the house. On his death in 1791, ownership passed to his young daughter (but was held in trust). The house was let out until 1799, and the trustees decided to sell it. 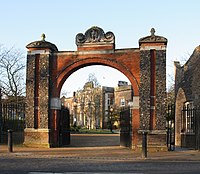 Pitzhanger gates and entrance to the park

By the 1790s John Soane had a successful architectural practice in London, holding the post of architect to the Bank of England. In 1794 he, his wife and their two young sons moved into 12 Lincoln's Inn Fields (now part of Sir John Soane's Museum) in central London, which doubled as an architecture office for him and his staff.

In early 1800 Soane decided to acquire a family home in the Middlesex countryside to the west of London. At first he planned to have it purpose built, but on 21 July 1800 he visited Pitzhanger, which he heard was available, and seeing its potential offered the trustees £4,500 for the whole estate of 28 acre. This was accepted on the first day of the following month. Soane referred to it as Pitzhanger Manor-house.

Soane worked vigorously on the designs of the new house, and over a hundred designs for it still exist.[5][4] He planned for the demolition of the older part of the house and many of the outbuildings; however, he retained the two-storey south wing designed by George Dance in part because of admiration for their interiors and in part in respect for Dance, his first employer. Demolition work started in 1800 and most of the rebuilding was complete by late 1803.

Completed in 1804, the central section of the house uses many typical Soane features: curved ceilings, inset mirrors, false doors, and wooden panelling with many cupboards. Soane continued the building to the east with a servants' wing (perhaps an adaptation of existing buildings) and romantic ruins. (All the buildings in this eastern part of the site were demolished in or around 1901.) The building is remarkably similar to his main London home at Lincoln's Inn Fields. Much of his collection of paintings and classical antiquities now at the museum was housed in Pitzhanger Manor.

Soane sold the house in 1810 and it then passed through several hands until in 1843 it became home to the daughters of Britain's only assassinated Prime Minister, Spencer Perceval.

Since Soane's time, the house has been referred to variously as The Manor, or Pitshanger Manor, but has now formally reverted to the name given to it by Soane, spelt with a 'Z'.

After the Soanes and the Percivals

In 1900 the house and a parcel of parkland was acquired by Ealing Urban District Council in order to serve as a Free Public Library.[6] Charles Jones, the council's architect, carried out extensive work to convert the house, though taking care to retain the best and historic features. On the north side of the house: Jones had the servants' quarters demolished and removed some ornamental faux Roman ruins. The library was opened to the public in April 1902.

The Library moved out in 1984 and in 1985 the restoration work began. Analysis of the structure and paint layers were used to recreate an authentic period look to the build.

The partially restored house opened to the public once again in January 1987 as a museum. In 1996 it began showing exhibitions of contemporary art, in the 1939 extension to the House and within the House itself. It later became known as 'PM Gallery & House'. Pitzhanger was closed for a major conservation project in March 2015 and reopened to the public in March 2019.

Due to Pitzhanger's authentic period look it has been registered as a film location and as such is available for hire. It is also next to Ealing Studios.