Peterston-super-Ely is a village and parish on the River Ely in Glamorgan. The community population taken at the 2011 census was 874.[1]

As its name suggests, the village lies on the River Ely, on the other side of which is the Coryton estate. The local parish church (in heavily restored simple Perpendicular style) is dedicated to St Peter. There are small remains of a castle.

The oldest structure in the conservation area is the remains of Peterston Castle situated beside Castle Bungalow. The castle was built by the Norman lords of the manor, Le Sor family probably in the mid 13th century. It replaced an earlier structure destroyed by the Welsh and in turn was sacked and destroyed by Owain Glyndwr in 1403. The earliest feature of St Peter’s Church is the 14th-century chancel arch but the church is more notable for its Perpendicular style tower. The west tower with its corbelled battlements and gargoyles is 15th century. The chancel was mostly rebuilt in 1890-91 by Kempson & Fowler. From the mediæval period until the 19th century, the settlement was a small rural community with the majority of its inhabitants deriving an income from agriculture. Major change arrived with the construction of the railway (opened 1850) and the opening of a railway station west of the village in the second half of the 19th century. A comparison of the pre-railway Tithe Map of c. 1840 with the First Edition Ordnance Survey of c.1880 shows that the railway required a slight re-alignment of the through road giving rise to the unusual alignment of properties south of the railway bridge. During the immediate post-railway period a school was built south of the church, The Old Rectory was built in 1857 and the chancel of St Peter’s Church was largely reconstructed. It has been suggested that the higher roots of the older yews in the churchyard indicate that the churchyard was cleared in the 19th century. In the early 20th century John and Reginald Cory, coal magnates, began a Garden Village to the south of, and quite separate from, the historic village, now known as Wyndham Park. Main Avenue was, and remains, a wide and straight spine road uphill from a bridge over the river. The road originally crossed the river on the site of today’s footbridge but is now re-directed westwards along Wyndham Park Way. The church’s lych gate is dedicated to those who fell in the Great War. The cost of the playing fields was deferred by grateful parishioners following the 1939-1945 War. Further housing development took place in the late 20th century adding to the settlement’s population and thereby helping the village to continue to support a village shop and school. 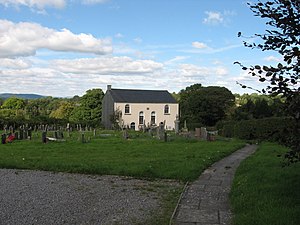 Past the Pub lies the local village shop and post office, the local BT telephone exchange followed by the church of St Peter. Opposite the Church lies the memorial park, which was created as a memorial to the brave soldiers who died in World War I. Next to the playing fields is the village hall, which was left to the villagers for the continuation of community spirit. The local playing fields are the home base of the Peterston Juniors Football Club[3] and the local tennis club. The tennis club contains three modern all weather asphalt courts and youth community coaching is available. A community playground was erected in 1975 and was only recently upgraded to modern standards in 2013 by local residents through fundraising.[4]

Past the memorial fields is the main railway bridge of the main rail line from Swansea to London. A station existed close to Station Terrace until 1971 when it was demolished. Various local campaigns have been carried out to rebuild a station in what would appear a somewhat obvious position but to no avail. As you travel over the bridge, the second of the village pubs, The Sportsman's Rest lies on the right hand side. The Sportsman's Rest is a freehold pub with play area at the rear.