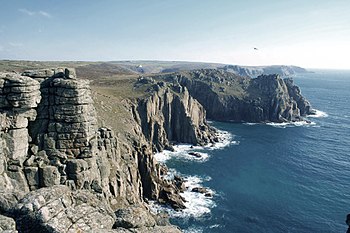 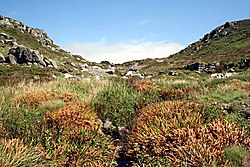 Penwith (Cornish: Pennwydh), also known as the Land's End Peninsula, is the westernmost finger of mainland Cornwall, forming a hilly, moorland peninsula west of Penzance, terminating at Land's End. It gives a name to the Penwith Hundred of the county.

The character of the peninsula is derived from its uncompromising geology; it is a granite massif of rugged hills, whose edges form the sea coast in cliffs and craggy coves, though the numerous bays have created sheltered fishing harbours and many fine beaches.

The name 'Penwith' is derived the Cornish language; penn wydh means 'headland at the end'. It is first found in the English language in the Anglo-Saxon Chronicle entries for 997, which name Land's End as Penwiht steort[1] and Penwæðsteort[2], and 1052 as Penwiðsteort.[3]

Natural England have designated the peninsula as 'national character area 156' (and named it 'West Penwith').[4] 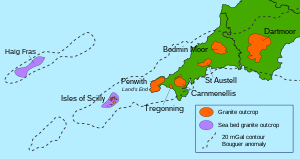 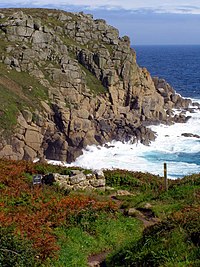 Penwith is formed of a granite intrusion, which is believed to be part of the 'Cornubian Batholith' – a single, vast granite intrusion, originally of solidified lava, which underlies Devon and Cornwall and which surfaces in a number of places in those counties in the form of Dartmoor, Bodmin Moor, Carnmenellis, Penwith and the Isles of Scilly amongst others.

Penwith thus sits predominantly on granite bedrock that has led to the formation of its rugged coastline. The contact between the granite and the adjoining sedimentary rock (mostly shales) is most clearly seen forming the cliffs at Land's End, the most westerly point of Penwith, and this geology has resulted in the mining that has made Cornwall famous.

Satellite image of the Penwith peninsula

Tin and copper have been mined in the area since pre-Roman times and the landscape is dotted with ruined mine buildings. Inland, the peninsula is primarily granite with a thin top soil. This combined with Cornwall's exposed position and the prevailing weather systems from the Atlantic Ocean means that, with the exception of the high moor areas, much of the area is a semi-bare plateau standing around 427 feet above sea level. This is most evident on the north coast between St Just and Zennor where the remains of the ancient seabed of the Pliocene era are visible. The highest point of the peninsula is Watch Croft (827 feet). 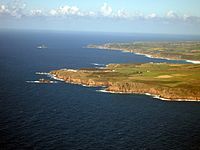 There are several deep valleys cut into this plateau such as Lamorna on the south coast, where sufficient shelter from the weather is gained for trees to establish and grow. The shelter of these valleys and the mild climate gives Penwith plants not seen anywhere else in the United Kingdom. Penzance's Morrab Gardens is able to grow bananas.

In addition to Penwith's status as a 'Heritage coastline', much of it is considered an 'Environmentally Sensitive Area'. Penwith lies within the Cornwall Area of Outstanding Natural Beauty (as does almost a third of the county).

Tewdwr Mawr or 'Teudaric' ruled over the area from Carnsew in the mid-6th century before returning to his patrimony in Cornouaille in Brittany around 577.[6]

Fishing Cottages in the Lamorna Valley

Penwith's population has remained broadly static for the last one hundred and fifty years.[7]

Penwith is believed to be the last part of Cornwall where the Cornish language was spoken as a community language. Dolly Pentreath, known as the last recorded speaker (but arguably not the very last) came from Paul north of Mousehole. A year following the death of Dolly Pentreath in 1777 Daines Barrington received a letter, written in Cornish and accompanied by an English translation, from a fisherman in Mousehole named William Bodinar stating that he knew of five people who could speak Cornish in that village alone. Barrington also speaks of a John Nancarrow from Marazion who was a native speaker and survived into the 1790s.[8] Chesten Marchant, d. 1676, a woman from Gwithian, is believed to have been the last monoglot Cornish speaker.

The scenery in this part of Cornwall makes it a popular holiday destination. Local attractions include the Minack Theatre, South West Coast Path, Land's End and the beach at Sennen Cove.

The Penwith hills have the highest concentration of Neolithic sites in Europe, including monuments at The Merry Maidens, Lanyon Quoit, Chûn Quoit and an Iron Age village at Chysauster.