Zennor is a village and civil parish in the far west of Cornwall. Its name comes from the Cornish language, from a local saint, St Senara. Zennor stands close to the north coast, about 11 miles northeast of Land's End and 6 miles north of Penzance on the south coast. The village has one pub, the Tinner's Arms, and a small museum, the Wayside Folk Museum.

The museum is built into a Cornish cottage, with an old-style Cornish kitchen. It contains a collection of material illustrating the life and work of western Cornwall; domestic items and industrial items, such as mining tools, some dating, it is believed, from 3000 BC, farming tools and others. It also has a working water wheel.

Although the village is not itself on the sea, fishing has long been part of local lore; a man would stand on the seacliff and call out to the boats when a shoal of mackerel came in sight. Mining too was an important part of the local economy from time immemorial, though all the mines have now closed.

D H Lawrence and his German wife, Frieda, came to settle in a house above Zennor in 1916, during the First World War, but they were driven out in 1917 when the locals became convinced that they were German spies. (He recounted the events in Kangaroo, published in 1923.)

The parish of Zennor includes the villages of Zennor, Boswednack and Porthmeor and the hamlet of Treen.

The parish church, St Senara, is partly Norman in construction and partly of the 13th century (the west tower may be of that date), while the north aisle was added in the 15th century.

The church has an octagonal font, possibly from the 13th century. One of only two remaining bench ends portrays the "Mermaid of Zennor".

Ancient stones in the hills

Zennor Quoit and Sperris Quoit stand 400 yards apart, ancient tombs on the hill. A prehistoric entrance grave at Pennance is known as the Giant's House and close by are four round barrows. A little over a mile from Porthmeor is a circle of 11 stones known as the Nine Maidens and at Treen Dinas a promontory fort with five lines of fortification. The local legend about the Nine Maidens is that a group girls form the village went dancing on the Sabbath and for this defilement of the day the girls and their fiddler were turned to stone.

The Mermaid of Zennor 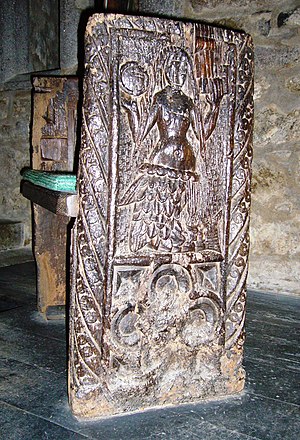 A local legend tells of Matthew Trewhella, a good-looking young man with a good voice. Each evening Matthew would sing the closing hymn at the church in Zennor, solo. A mermaid living in neighbouring Pendour Cove was enchanted by the music. She dressed in a long dress to hide her long tail and walked up to the church. Initially, she just marvelled at Matthew's singing before slipping away to return to the sea. She came every day, and eventually became bolder, staying longer. It was on one of these visits that her gaze met Matthew's, and they fell in love. However, the mermaid knew she had to go back to the sea or die. As she prepared to leave, Matthew said "Please do not leave, who are you, where are you from?"

The mermaid told him that she was a creature from the sea and that she must go back. Matthew was so love-struck that he swore he would follow her wherever she went. Matthew carried her to the cove and followed her beneath the waves, never to be seen again.

It is said that if you sit above Pendour Cove at sunset on a fine summer evening you might hear Matthew singing faintly on the breeze.

At St Senara Church in Zennor visitors may see a carved bench-end over 600 years old showing the mermaid.

In 1943 No 4 Commando Royal Marines were involved in a mock seaborne raid codenamed "Exercise Brandyball" which took place on the 300 foot cliffs near Zennor known as the 'Brandys'. The training exercise was deemed one of the most hazardous and challenging of the war, beginning with a seaborne landing, followed by a climb up the vertical cliffs with full kit to destroy the target, an old disused tin mine.

On the rehearsal day, 6 June 1943, the weather closed in and one of the boats sank with the loss of two marines. These events were filmed by Allied officers as observers from all the services were present, including General Montgomery. The archive is now held in the Imperial War Museum. The following day the men decided the operation should continue and it was successfully completed on 7 June 1943.[1][2]