The Paps of Jura (Gaelic: Sgurr na Cìche) are three mountains on the western side of island of Jura in Argyll's Inner Hebrides. Their highest point is 2,575 feet on Beinn an Òir‎.

Though there are three mountains, postcard photographs invariably show just two, which may be the exigencies of the photo frame but more probably to emphasise their remarkably breast-like shape which gives them their name.

The mountains are, in technical terms, steep-sided quartzite hills. They have distinctive conical shapes, resembling breasts. The Paps are conspicuous hills and dominate the island landscape as well as the landscape of the surrounding area. They can be seen from the Mull of Kintyre and, on a clear day, from Skye and County Antrim.

One of the simplest routes of ascent starts from Craighouse. The route of the annual Isle of Jura Fell Race includes all three Paps and four other hills. 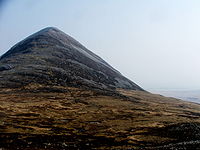 Beinn Shiantaidh from the south

These hills were the subject of William McTaggart's 1902 masterpiece The Paps of Jura,[1] now displayed in the Kelvingrove Art Gallery and Museum.[2]

The name Beinn an Òir is Gaelic for mountain of gold. It stands at 2,575 feet; the highest of the mountains.

Beinn an Òir is frequently climbed along with the other two Paps; the most usual route for this ascent starts from the bridge over the Corran River, in which case Beinn an Òir is the second peak to be climbed, as the middle mount. To climb Beinn an Òir alone, one would start from either of the bealachs that separate it from its neighbours.

Beinn a' Chaolais is Gaelic for mountain of the kyle. It is 2,408 feet high.

The southernmost of the Paps and the smallest, Beinn a' Chaolais forms the end of the triangle of the three, southwest of Beinn an Oir. Access is from the track from the western side of the island or from the well of the Corran River, which runs to the east.