Oranmore is a village in County Galway on the outskirts of the city of Galway. With its major housing developments, Oranmore is rapidly becoming a part of Galway's commuter or suburban belt.

Oranmore is six miles east of Galway on the edge of Oranmore Bay, an inlet of Galway Bay.

Oranmore is the anglicisation of Uarán Mór. The first written record of Oranmore is in the Annals of the Four Masters.[1] It was originally called Fuarán Mór ("Great Spring" in Irish). The name refers to a spring to the north-west of the main village. A bi-lingual information sign was erected by Oranmore Community Development Association in 2010 outlining the history of the spring.

The focus of industry has shifted from dairy agriculture to tourism, manufacturing and logistics. Oranmore now has four hotels and several restaurants. 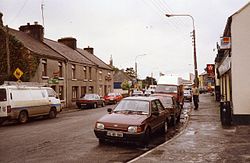