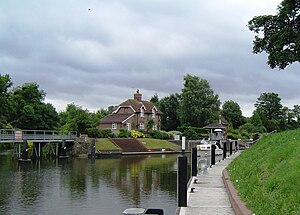 Old Windsor Lock from the upstream side

Old Windsor Lock is a lock on the River Thames in Berkshire close to Old Windsor on the side of the river towards the town. The lock marks the start of the New Cut, built in 1822 by the Thames Navigation Commissioners, which created Ham Island in the hook of the old river. The lock connects to Ham Island and there is a footbridge across the lock cut.

There is a small weir beside the lock, but the main weir is some way upstream at the top end of Ham Island.

The old name for the site of the lock was "Top of Caps" and the first suggestion for a lock at "Capps" was in 1770. However it was not until 1822 that the lock cut and lock were built. No weir was built at the time, although there was already an obstruction called "Newman's Bucks" at the islands that are now at the top of the lock cut. Of these islands, only that called Lion Island remains. The first lock keeper was dismissed after various demeanors which included digging through the bank of the lock cut and thereby causing the collapse of the new lock cut bridge. The weir was constructed in 1836. In 1868 there was discussion of removing the lock, but instead it was extended with a tumbling bay added. In 1871 the lock cut bridge was rebuilt with the right reserved to lay sewage pipes across it.[1] The lock was rebuilt in 1957. 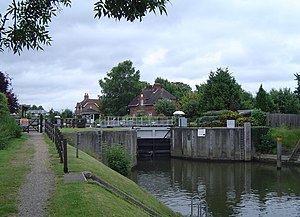 Old Windsor Lock from below

The lock is only accessible by foot and can be reached from the end of a long spur road leading to The Manor and The Priory from Old Windsor. Or by Church road then Ham Lane then the towpath. Ham Lane is a private road and only a public foot path not a public road. The bridge is private as is all of Ham Island, no public access.

The Cut is about half a mile long and is crossed by Ham Bridge going to Ham Island. Lion Island is at the top of the cut where the streams separate. Then Albert Bridge crosses the river and on the Berkshire side, the river winds round farmland at Princes Consort farm and Windsor Castle Home Park. On the Buckinghamshire side is the town of Datchet with Sumptermead Ait also belonging to that county. There follows Victoria Bridge and then a golf course, followed by Black Potts Railway Bridge. The railway bridge is supported by Black Potts Ait, behind which the Jubilee River rejoins the Thames. There are then the playing fields of Eton College. The area known as Black Potts up to Romney Island has been a popular fishing area, with Isaak Walton and Charles II both recorded as fishing there.

The Thames Path should continue on the towpath on the Windsor side, but this has been closed off and walkers are forced to cross Albert Bridge, take the metalled road through Datchet and Sumptermead Ait and return over Victoria Bridge.