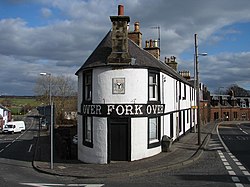 Ochiltree is a village and parish in Ayrshire near Auchinleck and Cumnock. It is one of the oldest villages in East Ayrshire, with archaeological remains indicating Stone Age and Bronze Age settlers.

The name Ochiltree was spelt Uchletree in the Middle Ages, and has a Brythonic etymology: Uchil tref - the high steading, either a reference to its landscape position (commanding views to south and east), or as a significant local centre.

Main Street is lined with stone cottages and one of these was The House with the Green Shutters in the 1901 novel of that name by George Douglas Brown, who was born in Ochiltree. An annual event, The Green Shutters Festival of Working Class Writing, is held here in Brown's memory.

The Tennant family, described by Robert Burns, originate from the village. Amongst their number are Charles Tennant, Alexander Tennant and Edward Tennant, 1st Baron Glenconner. Also from the village was a close associate of King James I, Michael Ochiltree.

Johnny Cymbal, the famous American-based singer, songwriter and record producer, was born in Ochiltree on 3 February 1945. He is best remembered for his 1963 signature hit "Mr Bass Man".

Ochiltree has a population of approximately 1,200. The village is home to Ochiltree Primary School and is served by one small shop at the bottom of Main Street. Two sporting venues exist: the Community Centre (next to the school); and the Bowling Club by the river. There is also a council house estate.

The ruins of ancient Auchencloigh Castle are located near Belston Loch. To the east of the village is the Barony A Frame, the preserved headgear of the Barony Colliery, which closed in 1989. A small loch, used latterly as a curling pond, known as Loch of the Hill lay close to South Palmerston Farm until it was drained in the late 19th century.

This Ayrshire article is a stub: help to improve Wikishire by building it up.