Oakham Castle is in Oakham, the county town of Rutland. It was built between 1180 and 1190, in the reign of King Henry II for Walchelin de Ferriers, Lord of the Manor of Oakham. It does not have the appearance of a castle, but today is in the form of a hall surrounded by long-abandoned earthworks enclosing a broad bailey.

The Castle is known for its collection of massive horseshoes and is also recognised as one of the best examples of domestic Norman architecture in Britain.[1] Admission to the castle is free. It stands in the town centre: a gateway from the Market Square leads to the castle grounds, and the town’s playing fields spread out beyond the earthen ramparts.

Oakham Castle is owned and managed by the local council. It is licensed for weddings. 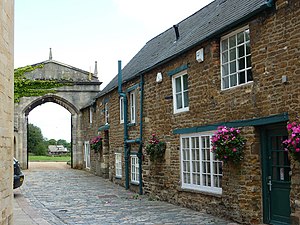 Castle Lane leading from the Market Place to the castle 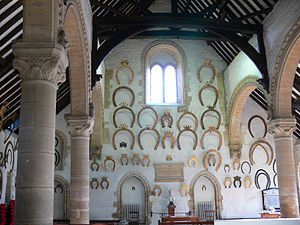 Horseshoes on the east wall

Oakham Castle does not represent the traditional image of a castle due to its small size. The Great Hall is all that remains of an early mediæval fortified manor house. It did, however, have many of the traditional features of a castle such as a curtain wall, a gatehouse and a drawbridge with iron chains. There is also historical and archaeological evidence to suggest that Oakham Castle possessed towers at strategic points along the walls as well as a moat.

The Great Hall comprises a nave and two arcaded aisles, each with three large stone columns. There are a number of 12th century sculptures decorating the Hall including six musicians that are supported by the columns. The sculptures are carved from local stone quarried at Clipsham and are believed to have been made by masons who had also worked at Canterbury Cathedral. It is thought to have been built by Walkelin de Ferrers circa 1180-90.[1]

The present gateway into the market place closely resembles the gateways at Burley on the Hill, and is thought to have been erected by the first Duke of Buckingham.[2] 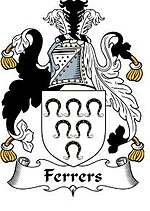 There remains a unique tradition that peers of the realm should forfeit a horseshoe to the Lord of the Manor of Oakham on their first visit to the town. Two hundred and thirty horseshoes currently decorate the walls of Oakham Castle. It is thought that this tradition is linked to the ‘de Ferrers’ family name. Ferrier was the Norman French word for farrier and the horseshoe has been a symbol of the de Ferrers family since Henry de Ferrers arrived in England in 1066.