Nympsfield is a village in Gloucestershire, around six miles southwest of the town of Stroud. As well as Nympsfield village, the parish also contains the hamlet of Cockadilly.

Nympsfield is on the path of a former Roman road, which ran from Cirencester to Arlingham.

The village has a strong strain of Roman Catholicism, which can be traced to William Leigh, a Victorian convert to Rome, who bought the manor and its estate in 1845. He built both a church and an even a monstery on his estate.[1] The village pub, the Rose and Crown, and its working mans club, are both reputed to be Roman Catholic institutions, and there is a Roman Catholic primary school.

The name 'Nympsfield' is a mix of the pre-Roman British language and Old English. The British language, from which Welsh is descended, gave the first element of the name; nimet meaning "Holy place", whence the Old English Nimtesfeld".

The earliest known recording of the village was as Nymdesfelda in 862 AD. In the Domesday Book, the settlement was recorded as Nimdesfelde. 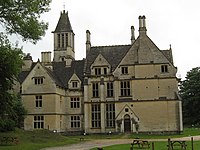 Woodchester Mansion close by the village is, an unfinished gothic mansion. The pre-exiting manor house had fallen into ruin when bought by William Leigh in 1845, and so he commissioned a fellow convert, Augustus Pugin, to build a new house, though Pugin resigned the commission and Charles Hansom took the job on. The building work was mysteriously abandoned in 1873. Today the manor is the headquarters of the Woodchester Mansion Trust, founded to protect and to preserve the building for future generations.

Parking is just outside the village and a free minibus to the mansion is operated by volunteers on days when it is open to the public.

A Neolithic burial site known as the Nympsfield Long Barrow is close to the village. Nearby too on the ay to Uley is Uley Long Barrow known locally as 'Hetty Pegler's Tump', a neolithic long barrow.

Coaley Peak picnic site is around half a mile from the village.

Another grand manor house, this one of Tudor design, is Owlpen Manor.

Nympsfield is the home of the Bristol and Gloucestershire Gliding Club.

Peter Hennessy, the constitutional historian, took the title Baron Hennessy of Nympsfield on receiving his peerage in 2010.

Nympsfield and the Rose and Crown Inn appear in several scenes in the 2012 novel Caballito[2] by Robin Baker. The author uses the fictional names Pegbury (for Nympsfield) and The Crown (for the Inn) but from the description of location and interior it is clearly the Rose and Crown as it was in the early 1980s.