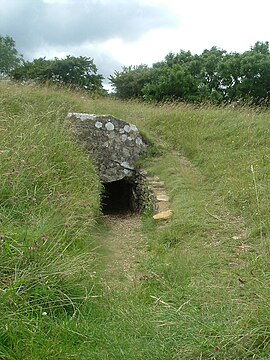 The entrance to Uley Long Barrow

Uley Long Barrow, also known locally as Hetty Pegler's Tump, is a Neolithic burial mound, near the village of Uley in Gloucestershire.

Although typically described as a long barrow, the mound is actually a transepted gallery grave. It was probably built before 3000 BC. 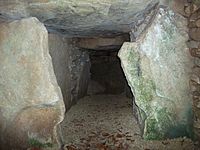 End chamber inside the barrow

The barrow measures about 121 feet long, 112 feet wide, and has a maximum height of 10 feet.[1] It contains a stone built central passage with two chambers on either side and another at the end. The earthen mound is surrounded by a dry-stone revetting wall.

The barrow was archaeologically excavated in 1821, revealing the remains of 15 skeletons and a later, intrusive Roman age burial above the northeast chamber. It was excavated again in 1854.

The mound is named after Hester, wife of the 17th century landowners Henry and Hester Pegler. Hester died in 1694, and Henry in 1695. It is clearly sign-posted from the side of the nearby Crawley Hill (B4066 road) between Uley and Nympsfield. It is about a mile south of Nympsfield Long Barrow.