Sula Sgeir is a small, uninhabited island in the North Atlantic, 18 miles west of the island of North Rona, and 40 miles north of the northernmost headland of Isle of Lewis. One of the most remote of the British Isles, it lies more than forty miles from any inhabited land and is it best known for its population of gannets.

The island's name is Gaelic, but derived from the Old Norse: súla sker, meaning "gannet skerry", a most appropriate name for a wee island famed for its gannets.

The island is uninhabitable and inhospitable, but the men of the Hebrides have visited Sula Sgeir since time immemorial and continue to do so for the annual guga harvest; the collection of young gannets for the pot. A ruined stone bothy stands on the island still, called Taigh Beannaichte (“Blessed House”), on the eastern headland Sgeir an Teampaill.

The hard gneiss rock of which the island is made splits into long pieces, which are excellent for building bothies and cairns, but the hard rough boulders and sharp rocks make for difficult walking.

The sea has burrowed right through the southern part of the island in a series of interconnected and spectacular caves (which can be explored in calm weather by inflatable boat). The small lighthouse on the south end at Sròn na Lice is regularly damaged by the huge seas which break right over the rock during Atlantic storms and the face of the rock is acrid with guano.

In spite of this, a surprising amount of vegetation grows on the island, and the thrift is especially colourful in June, reckoned the best month for a sightseeing visit by those hardy enough.[1]

A gannet is known as a “guga” in the islands and was long considered a delicacy; today it is considered more of an acquired taste, and one that few do acquire. The parish of Ness on the Isle of Lewis has a special privilege in this regard and each year a boat sails the from the wee harbour of Ness out to Sula Sgeir, where the men encamp for a week to a fortnight, catching, collecting, plucking and salting the gugas, ready to bear back across the wild ocean to their village. It is a hazardous undertaking, endangered by the seas, the exposed, barren rock, the weather and the stinging stomach fluid which a gannet throws up in the face of a threat. Back at the harbour, the sailors will be met by a long queue of cars hoping to buy from this last source of guga.

Sula Sgeir has a special place in the seafaring history of Ness. One of the earliest accounts written about the Outer Hebrides was by Dean Munro, who visited the islands in 1549. His description of Sula Sgeir mentions that the men of Ness sailed in their small craft to "fetche hame thair boatful of dry wild fowls with wild fowl fedderi".[2] How long before 1549 the Nessmen sailed to Sula Sgeir to collect the young gannets for food and feathers is not known, but it may be assumed that it was a tradition for centuries.

"There is in Ness a most venturous set of people who for a few years back, at the hazard of their lives, went there in an open six-oared boat without even the aid of a compass." [3]

Excellent seamanship was certainly essential for the success of these expeditions - rowing across miles of turbulent Atlantic was no pleasure cruise.

The flesh of the guga is regarded as a delicacy in Ness today. It was a popular meat in earlier times in Scotland; in the sixteenth century it was served at the tables of Scots kings and was a favourite with the wealthy as a ’whet’ or appetizer before main meals.

The harvest takes place in the autumn of each year, a hardy team of 10 Nessmen sets sail for Sula Sgeir to kill a maximum of 2,000 young birds. They set up residence for about two weeks in stone bothies which can be seen by any daring visitor. They bring home their catch to meet an eager crowd of customers, who snap up as many of the birds as they can. The demand is often so great that the birds have to be rationed out to ensure that each person does not go without a taste of guga.

Bird protectionists, who have tried to ban the harvest completely but tradition dies hard and the Sula Sgeir voyage goes on, with a special dispensation written into the Wildlife and Countryside Act 1981, which allows the Nessmen to continue their taste both for adventure and for the guga.[4]

There are some 5,000 breeding pairs of gannets on Sula Sgeir, which they share with other bird species such as black-legged kittiwakes, guillemots, puffins, fulmars and at present what is believed to be the only resident albatross in the North Atlantic.[5]

St Ronan's sister, Brenhilda, is supposed to have stayed here for some time, leaving him on Rona, only to be found dead in a bothy with a shag’s nest in her ribcage. 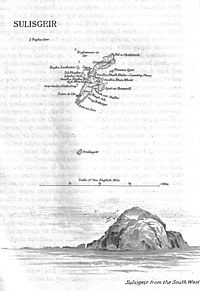