Newstead Abbey, in Nottinghamshire, is a country mansion built on the site of an Augustinian priory dissolved at the Reformation and converted to a domestic home. It is now best known as the ancestral home of the poet Lord Byron.

The priory of St. Mary of Newstead, a house of Augustinian Canons, was founded by King Henry II about the year 1170,[1] as one of many penances he paid following the murder of Thomas Becket.[2] Notwithstanding its current name, Newstead was never an abbey as such but was titled a 'priory'.

In the late 13th century, the priory was rebuilt and extend. It was extended again in the 15th-century, when the Dorter, Great Hall and Prior's Lodgings were added.[1] The priory was designed to be home to at least 13 monks, however there appears to have been only 12 (including the Prior) at the time of the dissolution.[1]

The Valor Ecclesiasticus of 1534 gave the clear annual value of this priory as £167 16s. 11½d. The considerable deductions included 20s. given to the poor on Maundy Thursday in commemoration of Henry II, the founder, and a portion of food and drink similar to that of a canon given to some poor person every day, valued at 60s. a year.

Although the clear annual value of Newstead was below the £200 assigned as the limit for the suppression of the lesser monasteries, this priory obtained the doubtful privilege of exemption, on payment to the Crown of the heavy fine of £233 6s. 8d in 1537.

The lake was dredged in the late eighteenth century and the lectern, thrown into the Abbey fishpond by the monks to save it during the Dissolution of the Monasteries, was discovered. In 1805 it was given to Southwell Minster by Archdeacon Kaye where it still resides. 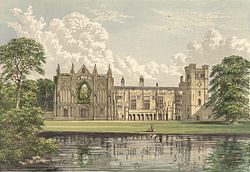 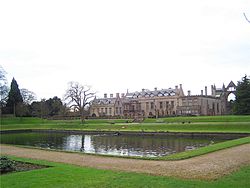 Sir John Byron of Colwick in Nottinghamshire was granted Newstead Abbey by Henry VIII on 26 May 1540 and started its conversion into a country house. He was succeeded by his son, Sir John Byron of Clayton Hall. Many additions were made to the original building. The 13th century ecclesiastical buildings were largely ruined during the dissolution of the monasteries. It then passed to John Byron, a member of Parliament and Royalist commander in the Civil War, who was created a baron in 1643. He died childless in France and ownership transferred to his brother Richard Byron. Richard's son William was a minor poet and was succeeded in 1695 by his son William Byron, 4th Baron Byron.

Early in the 18th century, the 4th Lord Byron landscaped the gardens extensively, to which William Byron, 5th Baron Byron added Gothic follies. It became a stately and glamorous estate. The 5th baron, known as "the Wicked Lord", was eccentric and violent and ruined the estate. Lord Byron's son and heir (also named William) eloped with his cousin Juliana Byron, the daughter of William's brother John Byron. Lord Byron felt that intermarrying would produce children plagued with madness and strongly opposed the union. He also needed his son to marry well to escape the debt that had been incurred in the Byron name. When defied by his son, he became enraged and committed himself to ruining his inheritance so that, in the event of his death, his son would receive nothing but debt and worthless property. He laid waste to Newstead Abbey, allowing the house to fall into disrepair, cutting down the great stands of timber surrounding it, and killing over 2,000 deer on the estate.

His vicious plan, however, was thwarted when his son died in 1776. William also outlived his grandson, a young man who, at the age of twenty-two, was killed by cannon fire in 1794 while fighting in Corsica. The 5th Lord died on 21 May 1798, at the age of seventy-nine and on his death, it is said, great numbers of crickets he kept at Newstead left the estate in swarms. The title and Newstead Abbey was then left to his great-nephew, George Gordon, the famous poet, who became the 6th Baron Byron.

The young Lord Byron soon arrived at Newstead and was greatly impressed by the estate. The scale of the estate contributed to Byron's extravagant taste and sense of his own importance. However, no less impressive was the scale of problems at Newstead, where the yearly income had fallen to just £800 and many repairs were needed. He and his mother soon moved to Nottingham and neither lived permanently at Newstead for any extended period. His view of the decayed Newstead became one of the romantic ruin, a metaphor for his family's fall:

Thro' thy battlements, Newstead, the hollow winds whistle;
Thou, the hall of my fathers, art gone to decay.

The estate was leased to the 23-year-old Henry Edward Yelverton, 19th Baron Grey de Ruthyn, from January 1803. The lease was for £50 a year for the Abbey and Park for five years, until Byron came of age. Byron stayed for some time in 1803 with Lord Grey, before they fell out badly.

In 1808, Lord Grey left at the end of his lease and Byron returned to live at Newstead and began extensive and expensive renovations. His works were mainly decorative, however, rather than structural, so that rain and damp obscured his changes within just a few years.

Byron had a beloved Newfoundland dog named Boatswain, who died of rabies in 1808. Boatswain was buried at Newstead Abbey and has a monument larger than his master's. The inscription, from Byron's poem Epitaph to a Dog, has become one of his best-known works:

Near this Spot
Are deposited the Remains
of one
Who possessed Beauty
Without Vanity,
Strength without Insolence,
Courage without Ferosity,
And all the Virtues of Man
without his Vices.
This Praise, which would be unmeaning flattery
If inscribed over Human Ashes,
Is but a just tribute to the Memory of
"Boatswain," a Dog
Who was born at Newfoundland,
May, 1803,
And died at Newstead Abbey
Nov. 18, 1808.

Byron had wanted to be buried with Boatswain, although he would ultimately be buried in the family vault at the nearby church in Hucknall.

He was determined to stay at Newstead—"Newstead and I stand or fall together"—and he hoped to raise a mortgage on the property, but his adviser John Hanson urged a sale. This would be a preoccupation for many years and was certainly not resolved when Byron left for his Mediterranean travels in 1809. Upon his return to England in 1811, Byron stayed in London, not returning to see his mother who had been living in Newstead. She died, leaving him distraught at his own negligence of her. He lived again at the Abbey for a time but was soon drawn to life in London.

For the next few years, Byron made several attempts to sell the Abbey. It was put up at auction in 1812 but failed to reach a satisfactory price. A buyer was found, however, who offered £140,000, which was accepted. By spring 1813, though, the buyer, Thomas Claughton, had only paid £5,000 of the agreed down-payment. Byron was in debt and had continued to spend money on the expectation that the house would be sold. Negotiations began to degenerate and Byron accused Claughton of robbing the wine cellar. By August 1814, it was clear that the sale had fallen through, and Claughton forfeited what he had paid of the deposit. Byron was now without settled financial means and proposed marriage to the heiress Anne Isabella Milbanke. Claughton did return with new proposals involving a reduced price and further delays. Byron turned him down. 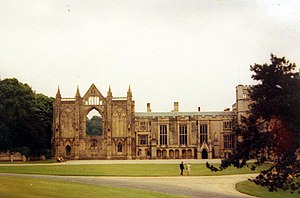 The Abbey again failed to reach its reserve price at auction in July 1815 and a buyer was found only during Byron's exile in Italy, in 1818:[3] Thomas Wildman, who had been at Harrow School with Byron and was heir to Jamaican plantations, paid £94,500, easing Byron's financial troubles considerably. Wildman too spent a great deal of money on the Abbey and its contents, restoring it to some greatness. The architect John Shaw Sr. designed new parts of the abbey for Wildman.[4]

In 1861, William Frederick Webb, African explorer, bought the Abbey from Wildman's widow. Under Webb, the chapel was redecorated, but the rest of the house remained largely unaltered. After his death in 1899, the estate passed to each of his surviving children and finally to his grandson Charles Ian Fraser. Fraser sold Newstead to local philanthropist, Sir Julien Cahn who presented it to Nottingham Corporation in 1931.

The Abbey is now owned by Nottingham City Council, and houses a museum containing Byron memorabilia.