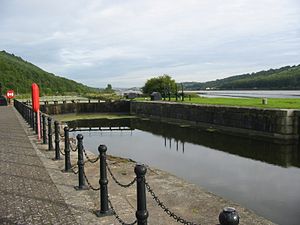 The Newry Canal stretches 27 miles in the Counties of Armagh and Down. It was built to link the Tyrone coalfields (by way of Lough Neagh and the River Bann) to the Irish Sea at Carlingford Lough near Newry. It was the first summit level canal to be built in the British Isles,[1] and pre-dated the more famous Bridgewater Canal by nearly thirty years and the Sankey Brook Navigation by fifteen years.

During Oliver Cromwell's campaign in Ireland in the 1640s, a survey of the area was made, and Colonel Monk ordered that a navigable trench from Portadown to Newry should be cut. Despite the order, no work was carried out, nor was it when Francis Nevil, a tax collector for the government, made a similar survey and proposal in 1703. Shortly afterwards, the Tyrone coalfield was discovered, and there was pressure to provide a route for the coal to reach Dublin. A bill was put before the Irish Parliament in 1715, for works to improve drainage and the carriage of goods, but it was not passed, and there was a gradual realisation that a local area such as this could provide neither the capital nor the expertise for such undertakings. In order to address the situation, the Irish Parliament in 1717 offered a reward of £1,000 to the first person to produce 500 tons of native coal in Dublin[2] and the Commissioners of Inland Navigation for Ireland were set up in 1729, consisting of three high officials from the government, four bishops, and eighty responsible persons, who would oversee all matters concerned with inland waterways.[3]

With the hope that a good transport route from the Tyrone coalfields to Dublin could result in the city becoming self-sufficient in coal, rather than having to rely on imports from mainland Britain, which were often intermittent, the canal was approved by the Commissioners.[4] Work did not begin immediately, as Thomas Burgh was Surveyor General, and he had interests in the collieries at Ballycastle, which would be affected by Tyrone coal becoming more generally available. Burgh died in 1730, to be succeeded by Edward Lovett Pearce, and work began on the canal in 1731. Although Pearce was officially running the scheme, he was busy constructing the new Parliament House at the time, and gave the task to one of his architectural assistants, Richard Cassels.[5] Cassels had escaped from the religious persecution of the Huguenots in France, and had travelled in Germany, the Low Countries and England, where he had studied navigation works, before arriving in Ireland to work for Pearce.[4] At the time he was known as Richard Castle, but reverted to his original name as his stature as an architect grew.[5]

With the death of Pearce in 1733, Cassels became the engineer for the project, which included building the first navigation lock in Ireland. He was discharged in 1736, probably because he was paying more attention to the architectural commissions he had taken over from Pearce,[6] he was replaced by Thomas Steers, who employed a local man called William Gilbert to oversee the work, which was completed by 1741.[7]

The Enterprise crossing the Newry Canal

The canal has 14 locks, nine of them to the south of the summit, which is 94 feet above the level of Carlingford Lough. The locks are 44 feet long and 15 ft 6 in wide. They were 12 to 13 feet deep and each lock was faced with stone from the Benburb quarries early in the 1800s after the original brick sides began to crumble. Thomas Omer completed a new two-mile ship canal from Newry to the sea in 1769 which could accommodate boats of up to 120 tons

As the Lower Bann drains Lough Neagh north into the Atlantic Ocean and the Upper Bann and the Newry Canal connect it south to the Irish Sea, the whole waterway may be seen as dividing the counties of Down and Antrim from the rest of the island of Ireland.

With the coming of the railways in the 1850s, the canal went into decline, and finally closed to commercial traffic in the late 1930s. Some sections have steadily fallen into a state of disrepair since then.

Although most of the lock gates have long since rotted away, many of the locks themselves are in excellent condition, being constructed from local granite. It is now overgrown for much of its length; however, this means that it is now a haven for wildlife, and with the construction of broad paths is enjoying a renaissance, with many families and individuals using these for walking and cycling. The towpath has been incorporated into the National Cycle Network. The Newry section of the canal remained the most vandalised and unsightly part of the canal. Although several locks have been restored to their original appearance, local anti-social behaviour and a lack of interest and action from Newry and Mourne District Council, allowed this section to deteriorate. Much has been improved since. There is renewed interest in the towpath and from Newry to Portadown it has been reopened with improvements for cyclists and walkers and is maintained by two wardens throughout the year.

The Belfast–Newry railway line provides access for walkers to the canal towpath by alighting at the following railways stations: Portadown, Scarva and Poyntzpass. 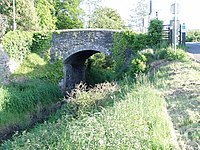