From Wikishire
Jump to: navigation, search
This article is about the footbridge. For the bridge that forms part of the A48, see City Bridge.

Newport City footbridge is a pedestrian/cycle bridge over the River Usk in the city of Newport, Monmouthshire.

The bridge links the east bank of the river in the vicinity of Rodney Parade stadium to University Plaza on the west bank. It was the first major public project in Newport Unlimited's plans to regenerate the city. The bridge won a design award from the British Construction and Steelworkers Association; the George Gibby Award 2007 by the Institution of Civil Engineers; the regeneration award by The Royal Institution of Chartered Surveyors as well as a highly commended by Wales Business Insider for the best regeneration project of 2007.[1] 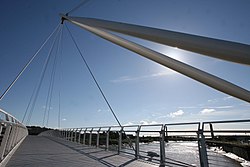 The bridge features two A-Frame masts, which support the bridge from the west bank. The masts are positioned on a shared foundation and anchored at ground level by two 4¾-inch-diameter cables that are connected the tips of the masts. The forward mast is 262 ft long and the back mast is 226 ft long. Because of the angle at which the masts are positioned, the bridge stands at 229 ft above ground. The deck is 16 ft wide and 13 ft 6 in above water at high tide. The bridge has a clear span of 476 ft.

The dramatic crane structures were designed as a deliberate and symbolic link to the site's earlier use as trading wharves—but with a modern twist. The deliberate location of the main structures on the west bank means that the vast majority of the construction work was kept away from the houses on the east bank, while avoiding impact on the local river ecology.

The bridge foundations are supported by thirty 35½-inch-diameter CFA (continuous flight auger) piles varying in length. The bridge structure is suspended on five ground anchors which are drilled 98 ft into the ground.

Approximately 800 cu. yds of concrete were used in the bridge foundations.

The masts are made from sheet steel which was rolled into 'cans'. These were then welded together to produce the tubes for the masts.

The front mast is 8.2 ft in diameter and was delivered to site in nine sections. It weighs approximately 275 tons.

The back mast is 5.7 ft in diameter and was delivered to site in seven sections. It weighs approximately 177 tons.

The bridge deck is made up of five sections.

The deck units were installed in sequence and then welded together. Details of the deck units are shown below:

A half-mile of cable is used to support the bridge, varying in diameter from 2 in to 4¾ in, made by Bridon Ropes of Doncaster.

The main masts for the bridge were erected in the week commencing 1 May 2006 using the largest crane in the UK.[2] It was officially opened on 12 September 2006 (also the centenary of Newport Transporter Bridge) and is the ninth crossing of the Usk in the city.

As part of the city's "Big Splash" festival, on 30 August 2010, 45-year-old French circus star Olivier Roustan from Toulouse, performed the highest ever wirewalk in Europe, along the top cable of the Newport City Footbridge.[3]