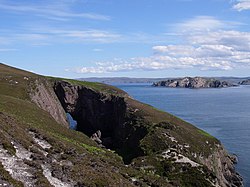 A view of Neave Island (background) from Eilean nan Ron

Neave Island (also Coomb Island) is an island on the north coast of Sutherland. It is 75 acres in size and has a highest elevation of 230 ft.

It is a small rugged island to the east of Eilean nan Ròn, separated from the mainland by a narrow channel, Caol Beag.[1] It is just over half a mile from the settlement of Skerray and is known for its sandy beach on the far eastern end of the island.[2] There are remains of an ancient church, Shown to be called St. Coloumba's Church on an 1874 map of the Island.[3][4]

This Sutherland article is a stub: help to improve Wikishire by building it up.
Retrieved from "https://wikishire.co.uk/w/index.php?title=Neave_Island&oldid=44318"
Categories: