Mornington is a coastal town on the banks of the River Boyne in Meath, approximately three miles downriver from the Centre of Drogheda. Together with the neighbouring villages of Laytown and Bettystown it comprises the census town of Laytown-Bettystown-Mornington with a combined population of 10,889 at the 2011 Census, which is part of the wider area collectively known as East Meath.

The large townland of 1,223 is bound on the north by the River Boyne estuary and on the east by the Irish Sea. The townland extends along the seashore to Bettystown village and includes part of that village up to and including The Neptune Hotel. The point of land where the Boyne turns South-East before entering the sea is known locally as The Crook or Crooke.

Mornington can also refer to a larger area, a half-parish, within the Laytown-Mornington Roman Catholic Parish established in 1986, and formerly part of the Parish of St Mary's in Drogheda.

Maiden Tower and the Lady's Finger 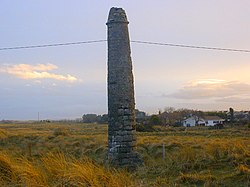 Mornington also contains the Maiden Tower and the Lady's Finger, two structures most likely to have been navigational aids for ships entering the River Boyne. The original name of the Maiden Tower was Mayden Tower. The area was then known as Maydenhayes. The title Lord of Maydenhayes is currently in possession of Edmund J. McCormick, Jr, of Far Hills, New Jersey in the United States. The tower was already in existence by 1582 when it was proposed to build at Ringsend a tower of such height and strength as shalbe of a perpetual continuance like the tower at Drogheda.[1][2][3]

Mornington was traditionally a fishing village based on salmon fishing and mussel dredging on the River Boyne. The fishery was commonly called the lord's fishery in the time of the Stuarts. The fishing by draft nets was done from about 14 set stations and "Boyne salmon fishermen had a particular method of working which involved two men. One man stayed on shore holding a rope attached to the net, while the other rowed out into the river with the other end of the net. Once the whole net was spread out, the boatman rowed back to shore and the two men pulled the net to shore, trapping fish as it went".[4]

A fish-meal factory was set up at the Crooke in 1968[5] by a Scottish concern to process fish from the herring industry out of Clogherhead and Skerries. It's construction impinged on the customary right of fishermen to draw their boats up at that point. It wound up in in the late-1970s following several years of heavy fishing by vessels which lead to Herring stocks in the Irish Sea collapsing.[6] The private jetty continued to be regularly used by fishing boats from Clogherhead to moor up and the company was finally liquidated in 2003. The Irish Government bought the jetty and adjoining lands in 2001 for £170,000 to retain its use as a licensed location to land explosives in commercial quantities, chiefly for local quarrying enterprises, and munitions.[7]

In 2006 amid concerns of dwindling spawning salmon numbers, the decision was taken to ban draft net fishing. Of the 50 fishermen then with licenses only 14 remained on and "they came to an agreement with the Inland Fisheries Ireland to take part in a scientific experiment that tags fish caught in the nets, under the eye of fishing inspectors. They are then released, allowing them to head back upstream".[8]

The mussel fishing involved a particular currach-style boat or punt and a mussel rake dredged by hand similar to that on the River Conwy in North Wales. These can be seen in these images of mussel dredging in the 1990s. In 2006 the Drogheda Port Company undertook silt dredging from Tom Roe's Point deepwater berth to the viaduct at Drogheda. Mussel fishing has been suspended since.

Drogheda Port management of the River Boyne estuary channel has been a feature of the last 150 years, with major dredging work beginning in the 1830s, after the Alexander Nimmo report of 1826 based on a survey of the estuary by John Benjamin Macneill. A recent EPA report states that "From Drogheda town to the sea at Mornington the river has been trained by means of training walls constructed around the 1850s by the then Drogheda Harbour Commissioners. This captured the main river flow with estuarine polders being created north and south of the training walls. This important work had two effects in that it increased the tidal exit velocity and thereby produced a scouring effect and created a reserve of water from the estuarine polders to supplement the falling tide.[9] As part of this engineering the old bridge at Mornington previously had a lock gate which restricted tidal water entering the Colpe stream.

Several daily bus services are provided between Laytown and Drogheda via Bettystown and Mornington.[10] Matthews Coaches provide commuter routes to Dublin which serve Donacarney Cross and Laytown, Bettystown and Julianstown.[11] Mornington is served by rail by both Drogheda and Laytown railway stations. 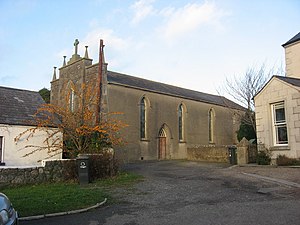 Old Star of the Sea church

There is one church in Mornington, it is Roman Catholic and known as the Star of the Sea. It was dedicated in 1989 to replace an earlier Star of the Sea church in Mornington built in 1841, which is located down the road overlooking the point were Colpe stream enters the Boyne at the bridge at Mornington. It replaced in its turn a pre-Reformation church, whose ruins are located in the old graveyard adjoining. St Patrick is said to have landed here, the mouth of the Boyne, anciently called Inbhear Colpa, on his way to Tara, though the church, and the former Church of Ireland church at Colpe, were traditionally dedicated to St Columba. A former holy well dedicated to St John was located near the new church in an area known as "The Glen" close to the Colpe stream. Its pattern was suppressed by a local priest in times past.

Laytown and Bettystown Golf Club[12] is situated in Mornington townland.

The famous jockey Mornington, or Morny, Cannon was born the same day that his father Tom Cannon won the Somersetshire Stakes, at Bath, on a colt named Mornington,[13] and named after that event.

Mornington beach consists of dunes and a strand extending from the River Boyne mouth to the Neptune Hotel. It is a popular site for walkers and day-trippers in good weather. In recent years and with the popularity of Bettystown the name of Bettystown Beach has become more current. The Laytown and Bettystown Golf Club's location in the Mornington dune-system and the development of the area has also influenced the name shift. Mornington beach is now seen to consist of the dunes around the Maiden's Tower and that area of soft sand nearing the Boyne entrance walls for which signs are erected warning cars of the danger. In recent times bodies of murder-victims relating to criminality have been found here in 2007[14] and 2013.[15]

Mornington known variously as Villa Marinarii, Marinerston by Colp, Marinerstown or Mornanton was in mediæval times a 'manor' and though its tithes were granted by Hugh de Lacy in 1182 to support the Augustinian Abbey at Colpe, (founded as a cell of Llanthony Priory in Monmouthshire), it was separate to the more extensive Manor of Colp, which took its name from Inbhear Colpha an older name for the area at the mouth of the Boyne. By the Civil Survey of 1654 however it was being considered as part of the Civil Parish of Colpe and it appears in Samuel Lewis's "Topographical Dictionary of Ireland" (1837) under Colpe, or Colpe-cum-Mornington.

The Ozanam Home now sits on the site of 'Mornington House', Coney Hall, formerly the principal residence in the area and owned by the Brabazon family. A plaque dedicated to James Brabazon, Esq., who died in 1794, shows his links to the Earls of Meath, and is found on the wall of the early church in the old graveyard of Mornington. The family's association goes back to their seventeenth-century ancestor, a Captain James Brabazon who was wounded at the Battle of Aughrim on the Williamite side.[16] Other significant families in the area were the Draycotts, descendants of Henry Draycott and the Weslies, later Earls of Mornington.

Title of "Earl of Mornington"

The title Earl of Mornington has been one of the greatest British aristocratic titles for centuries. Originally a British peerage, it is now a courtesy title. The current holder of the earldom is Arthur Darcy Wellesley (born 2010), the son of Arthur Gerald Wellesley, Marquess of Douro, and his wife Jemma, née Kidd, who is the sister of Jodie Kidd. The connection with Mornington of the Wellesley, Wesley, Weslie, or, Weisle family name goes back to at least the sixteenth-century, as Lewis says on the suppression of Colp Abbey a place called Weisle's Farm in Mornington was paying tithes to the Abbey. Gerald Weslie, late of Dangan, "Irish Papist", who died in 1603, is mentioned in an inquisition of 1624 as having been in possession of "the manor of Marinerstown or Mornanton counting two messages and 120A and of a capital fishery commonly called the lord's fishery".[17] Richard Colley, later Richard Wesley, 1st Baron Mornington inherited Dangan and Mornington in 1728. His son was the 1st Earl of Mornington, the father of Field-Marshal The 1st Duke of Wellington. The many places in Australia and across the world were named in honour of the second Earl, a brother of the Duke of Wellington.