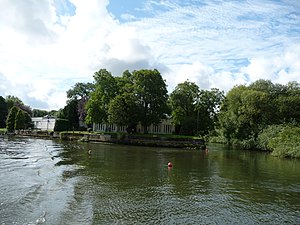 Monkey Island is a small island in the River Thames belonging to Berkshire. It is situated on the reach above Boveney Lock near the village of Bray. It is now occupied by a hotel but sports an interesting history involving grotesquely painted monkeys and the Duke of Marlborough.

Although painted monkeys still lurk in the pavilion, the name Monkey Island stems from the Old English Monks Eyot, i.e., Monks' Island. It was named after those monks residing at Amerden Bank, a moated site near Bray Lock on the Buckinghamshire bank of the river, as part of the Merton Priory from 1197 until the Dissolution of the Monasteries. By the 14th century, Monkey Island had passed to the Canonesses of Burnham Abbey, a mile to the North, and in the Bray Court Rolls of 1361, the island is called Bournhames Eyte. That name recurs in the P.R.O. plan of 1640 as Burnham-Ayt.

The island passed to the Englefield family in 1606. After the Great Fire of London in 1666, Oxfordshire stone was shipped downstream in barges for rebuilding of the City. On their return, the barges carried rubble to be dumped on the Thames islands. Such London rubble gave Monkey Island today's solid foundation and raised it high enough to eliminate the danger of serious flooding.

In 1738, Charles Spencer, 3rd Duke of Marlborough acquired the island from Sir Francis Englefield. Spencer had seen the property while attending the Kit-Kat Club at nearby Down Place. The Duke was a well-known angler, and it was he who erected the first two buildings on the island to indulge his hobby. The fishing lodge and the fishing temple, as they were then described, stand to this day as the Pavilion and the Temple, respectively.

Palladian architect Robert Morris was enlisted to design and build both buildings at a cost of £8,756. The ninth Earl of Pembroke was also involved in the design of the Temple; the Duke paid him £2,277 for his work from 1745 to 1748.

Reflecting the craftsmanship of the time, the Duke had the Pavilion built out of wood blocks cut to look like stone – an original feature that can be seen today. Inside the Pavilion, perhaps the Duke’s most intriguing mark is the delightful Singerie paintings of the Monkey Room. Spencer commissioned the French artist Andieu de Clermont to paint these captivating and unique scenes of monkeys doing rather humanlike activities – shooting, fishing, smoking – and it is known they were completed before 1738. Andieu de Clermont is also known for his paintings in Langley Hall in Norfolk.

The curious nature of the Duke’s décor later led some to call the island "Marlborough’s Folly". Indeed, Lady Hertford described the Pavilion soon after it was finished with both a hint of admiration and amazement:

The parlour, which is the only room in it except the kitchen, is painted upon the ceiling in grotesque, with monkeys fishing, shooting etc., and its sides are hung with paper. When a person sits in this room he cannot see the water though the island is not above a stone's cast over: nor is he prevented from this by shade: for, except for six or eight walnut trees and a few orange trees in tubs there is not a leaf upon the island; it arises entirely from the river running very much below its banks.

The Temple, built 100 yards from the Pavilion, was originally open on the ground floor like a market stall. The Duke’s fine and eclectic decorative taste is again evident in the first-floor room that was once a billiard room. Its grand ceiling – with Neptune, shells and mermaids in high relief plasterwork of Wedgwood style – is said to be the work of Roberts of Oxford circa 1725, though some accounts attribute it to carver William Perritt.

The Duke of Marlborough died in 1758. Monkey Island was later purchased in 1787 by Henry Townley Ward, Esq., who later bequeathed it to P.C. Bruce, Esq., of Taplow. 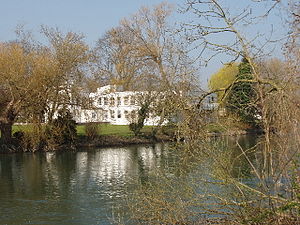 By 1840, the Pavilion had become a riverside inn reached by ferry from the South Bank. By the mid/late 19th century the hotel was called the "Monkey Hall Hotel". Visitors have been staying in various parts of the two buildings ever since. It became particularly fashionable just after 1900, when Edward VII and Queen Alexandra often had afternoon tea on the lawns with their children. Edward Elgar composed his violin concerto in 1910 in the Hut, a house on the riverbank facing Monkey Island. Musical stars Clara Butt and Nellie Melba entertained the island’s guests. From 1912, Rebecca West and H. G. Wells frequented the island. And it was here that West set her first novel, Return of the Soldier, whose heroine was the innkeeper's daughter.[1]

The middle of the twentieth century saw extensive additions to and refurbishment of the island. In 1956, the footbridge that connects it to shore was added after Christopher Reynolds purchased the island. In 1963, the Pavilion's dining area was expanded by the addition of the River Room, a large, glass-walled building that hangs just over the Thames. Named in homage to the Duke, the Marlborough Room was added in 1970 at the upstream end of the building, whose walls were painted with battle scenes. In the same year, the Temple was extended to provide a further 30 bedrooms. The Pavilion and Temple are both Grade-I listed buildings.[1]

As proprietor from 1956 to 1971, Mr Reynolds brought renewed vigor to the island with his thoughtful additions. Monkey Island also enjoyed continued popularity: in 1964 it played host to a ball in aid of Oxfam, which Tatler covered under the headline "Oxfam-On-Thames".[2]

In 1967, Mr Reynolds produced Monkey Island’s own journal, The Islander. The first issue told of the popularity of the island’s Club Suppers, Island Luncheon Club for Ladies, and entertainment provided by Jimmy Fraser and Mike Allen. The hotel was purchased by Major Fitzwilliams and later sold to the Weinreb Group, which subsequently went into receivership.

In 1976, Paul and Liz Nichols purchased Monkey Island Hotel from the Liquidators and carried out extensive renovations during their nine-year tenure. The hotel achieved recommendations from the Michelin Guide, Egon Ronay and was a British Tourist Authority Country Hotel and Restaurant Award winner in 1983,1984, and 1985. In 1986, the hotel was sold to Basil Faidi, who further restored the Grade-I listed buildings.

The hotel was sold some 10 years later to the Habtour Group and was then acquired by Dr Andreas C. Papadakis in September 2007.[3]

In Chaper 94 of Charlie Higson's young adult horror novel, The Fallen, Ella, Maeve, Monkey Boy, and Robbie leave the Natural History Museum to stay in the country, and running out of petrol, settle in at the Monkey Island Hotel. In the book's final chapter (Chapter 96), the haven has become a house of horror.[4]