Millwall is a town on the Isle of Dogs in south-eastern Middlesex, within the London conurbation. It is most famous for the football team Millwall F.C., which was founded in Millwall in 1885, but has not played in Millwall since 1910 when it moved across the River to Bermondsey, Surrey.

Part of the ancient parish of All Saints Poplar, Millwall became heavily industrialised in the 19th century, containing the workplaces and homes of a few thousand dockside and shipbuilding workers. Among its factories were the shipbuilding ironworks of William Fairbairn, much of which survives as today's Burrells Wharf. It was in this era also that Millwall F.C. was founded, in 1885, as Millwall Rovers.[1] First nicknamed 'the Dockers' before becoming 'the Lions', the team moved south of the river to New Cross in 1910, however a set of amateur football pitches remain, adjoining Cubitt Town alongside the City Farm that was added in the 20th century.[2][3]

Originally known as Marshwall, a new name came with its breakaway from its mother parish. The replacement was due to the large number of windmills built on the river wall in the 19th century. Improvements led by the Lord Mayor William Cubitt in reinforcing the land solved the periodic flooding caused by major snow melt and spring tides. Corn and wheat were brought along the River Thames to be ground into flour there.

On 31 January 1858, the largest ship of that time, the SS Great Eastern, designed by Isambard Kingdom Brunel, was launched from Napier Yard, the shipyard leased by Messrs J Scott Russell & Co. The 692ft length was too wide for the river, and the ship had to be launched sideways.[4] A section of the concrete and timber substructure from the launch site is now preserved on-site for public display at the modern Napier Avenue. Due to the technical difficulties of the launch, this was the last ship of such a size to be built on the island, though other builders such as Yarrows and Samuda Brothers continued building warships on the island for another 50 years. 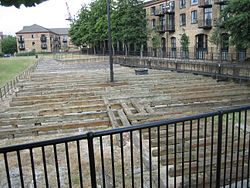 Some of the concrete and timber sub-structure of Great Eastern's launch ramp.

In the 1860s the large Millwall Dock was built, extending from the Thames at Millwall into the centre of the Isle of Dogs. The spoil from the dock was left as the Mudchute. 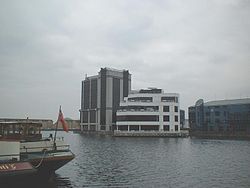 A March 2004 view of the Millwall Docks

Like other parts of the Isle of Dogs, substantial redevelopment has been more or less ongoing since the 1980s, resulting in modern industrial and commercial buildings and hastily constructed contemporary housing beginning to predominate over the remaining early 20th century "two up, two down" semi-detached and terraced homes that housed the dock workers, often overcrowded with occupants. Urban neglect has been followed by private housing on former industrial land. This meant a bounce back in terms of population, which fell in the mid 20th century with all the many manufacturing and distributing work which relocated due to the loss of docks and led to a certain amount of reliance with those who remained on council housing followed by social housing.

The name "Millwall" retains a negative image owing to associations with the British National Party and football hooliganism, so many residents now refer to the area as simply "the Isle of Dogs" or "Docklands".[6]

Millwall is arguably most famous for its football club, Millwall F.C., founded in 1885 as Millwall Rovers.[1] Occupying four separate grounds on the Isle of Dogs in the 25 years since its formation as a football club, they now play in Bermondsey and retain the name Millwall despite not having played in the Millwall area for more than 100 years.[7]

Millwall Rugby Club was formed in 1995. The first team plays in the Essex league and the seconds are in the Essex Merit Table. They also have women's rugby - the Millwall Venus girls - and a youth section for boys and girls from eight years old.

The nearest stations are Mudchute, Crossharbour and Island Gardens on the Docklands Light Railway.

Millwall is connected to the National Road Network by the north-south A1206 Westferry Road.