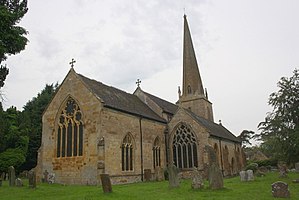 Mickleton is a village and parish in northern Gloucestershire, close to the borders with Worcestershire and Warwickshire. The civil parish had a population of 1,676 at the 2011 census.[1]

The village lies eight miles south of Shakespeare's Stratford-upon-Avon at the western edge of the Cotswold escarpment in the Vale of Evesham. Chipping Campden lies three miles to the south.

Mickleton is noted for its market gardening and vegetable growing. Meon Hill, scene of the so-called 'witchcraft' murder of Charles Walton in 1945, lies to the north of the village. Meon Hill is said to have provided inspiration for Tolkien's 'Weathertop' from The Lord of the Rings. According to legend, Meon Hill was formed by the Devil. He intended to throw a clod of earth at Evesham Abbey, but missed, and the earth formed the hill.[2]

Mickleton has two old pubs, King's Arms and Butcher's Arms, and a hotel, Three Ways House Hotel. Sited on a green in front of the hotel is a memorial fountain by the Victorian architect William Burges.[3]

The Heart of England Way runs through the village. Local market towns and villages include Broadway, Chipping Campden, Stratford-upon-Avon, Moreton-in-Marsh and Evesham.

Both Hidcote Manor Garden and Kiftsgate Court Gardens are located nearby.

This Gloucestershire article is a stub: help to improve Wikishire by building it up.
Retrieved from "https://wikishire.co.uk/w/index.php?title=Mickleton,_Gloucestershire&oldid=45392"
Categories: