Megget is a former chapelry in Peeblesshire containing the valley of Megget Water. It now formis the westernmost part of the civil parish of Yarrow, otherwise in Selkirkshire. The centre of the valley is 19 miles west of Selkirk. Megget derived its name from the river, which took its name from the whey colour of its waters (Gaelic or old Welsh).[1]

The district is bordered on the west by the parish of Tweedsmuir; on the north-west by Drumelzier; and on the north by Manor (all in Peeblesshire).[2] On the east side it is joined to the rest of the civil parish of Yarrow at the county border. It is bounded on the south by Ettrick in Selkirkshire; and on the south-west by Moffat in Dumfriesshire. Megget Stone lies on the western parish boundary, with Tweedsmuir.[3]

It is about seven miles long north to south and about six miles wide with an area of 14,500 acres.[2]

Megget is almost entirely covered with hills, which extend in two parallel ranges from west to east, having between them a narrow valley, which scarcely in any part exceeds a quarter of a mile in breadth.[7]

Megget Water, rising at an altitude of 1,500 feet, winds seven miles east-north-eastward to St Mary's Loch, on the way being joined by Cramalt, Glengaber, and sixteen other burns. Along St Mary's Loch the surface declines to close on 800 feet above sea-level.[2] Megget Reservoir was opened in 1983, with a dam just upstream of the confluence of Megget Water and Glengaber Burn, flooding the area below 1,096 ft (above sea level) west of the dam. 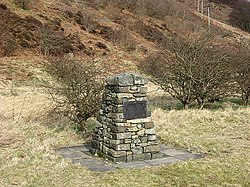 Anciently, the vale of Megget was known as Rodonna, and formed a favourite hunting-ground of the Scottish sovereigns, until the deer were extirpated or became scarce in the reign of Queen Mary.[10] The ancient barony of Rodonna, comprising the vale of Megget, was granted by Alexander II to Melrose Abbey in 1236.[11]

Before the union with England defensive towers were built in Megget, serving as both watch towers and signalling stations.[7] The tower at Cramalt is mentioned in 1530 and 1555 and its remains were visible until inundation by Megget Reservoir.[12] It has been partially reconstructed just above the shoreline of the reservoir.[13]

At Henderland, in the east of the parish, there is a ruin of a church, which is surrounded by a cemetery. Before 1810 there were no other remains of an ecclesiastical edifice and this was assumed to be the ancient church of Megget.[1] The chapel at Henderland was on the north bank of the Megget, not far from its confluence with the St Mary’s Loch. On a tombstone found in the ruins in the mid 18th century, were sculptured a cross and sword, with the legend ' here lyes perys of Cokburne and his wyfe Marjory.' [14]

This district, apparently a chapelry before the Reformation, appears to have been assigned anciently to the parish of Traquair. Even in the mid-17th century there were references to Henderland and other places in Megget being described as in the parish of St Bride of Traquair, to which it would seem the district had previously belonged.[14]

In 1614 it was recorded that John Fawsyde was minister of Rodonno, Henderland, or Megget; also that Newlands and Kirkurd were also under his care.[15]

By an Act of the Scottish Parliament of 1621,[16] the Parish of Rodonno or Megget was joined to that of Lyne, a parish about 14 miles to the north without any proper connecting road.[10] This union took place in consequence of a joint petition from the Proprietor of both parishes, Lord Hay, of Yester, and the inhabitants of Megget to the Lords Commissioners for Plantation of Kirks, desiring that Megget might henceforth be part of Lyne. It is unique that Megget was not united to one of the neighbouring parishes, but instead to a parish which is so distant from it. The smallness of the stipends might have been a reason, also that both parishes belonged wholly to the same proprietor, Lord Hay of Yester, and, it is more than probable, that he had considerable influence in procuring the annexation.[17]

For 270 years Lyne and Megget formed a united parish, but because of physical separation, Megget had certain attributes of a parish. Like other parishes it was a Registration District.[4][5] As reported in 1839, Commissioners found that the church in Lyne and chapel in Megget operated independently with their own arrangements, but with a common minister who attended Megget one Sunday in three. None of the parishioners of Meggett attended the church in Lyne.[18]

Following a review by a Boundary Commission in 1891, the detached part of the civil parish of Lyne and Megget was added to that of Yarrow, although the ecclesiastical parishes remained the same until 1948. 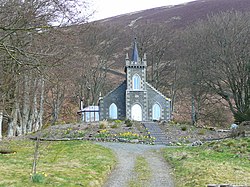 At Henderland there are the vestiges of a chapel and burial ground, and a tombstone of Cockburn of Henderland, a noted freebooter, with an inscription which is still legible.[7] There are the foundations of a rectangular, single-chambered chapel, measuring 24 ft by 41 ft. These are sited on the summit of Chapel Knowe and are evidently the Kirk of Enderland, which was described in the Records of the Presbytery of Peebles in 1603 as 'altogedder down and equall wt ye erd', i.e. in a ruinous state.[19]

Although there was reference to building a church in the Act of Parliament that united the parish with Lyne,[16] it appears that the minister had to preach in farm houses in the area.[18] Then a chapel was erected around 1804, with an apartment in it designed for a school.[7]

It was situated in the centre of the valley, 2½ miles from the farthest parish boundary,[18] between Cramalt and Craigierig. The site is now submerged under the reservoir.[20] This was built, not at the expense of the heritors of the parish (the usual practice), but with money raised by the parish combined with the aid of the resident farmers, who assisted in collecting materials.[7] It had a slate roof and seats and was maintained by voluntary contribution, although by the 1830s it was in want of repair.[18] It was restored and became known as the “Tin Kirk”, but by the 1950s it was closed and being used as a hay shed.[21]

Megget War Memorial was originally erected in or by this chapel, but when the church was drowned under Megget Reservoir, it was moved to the old Cappercleuch Church.[22]

A church was built in Cappercleuch in 1845, one of the first church buildings of the Free Church of Scotland, which broke away from the Church of Scotland only two years earlier. It continued to be used as a church until 1995, when declining attendance forced it to close. It is now a private house (Le Craobhan Treun).[23] The war memorial of Megget was then moved to its present site at the junction of the main road through Megget with the road alongside St Mary’s Loch.[22]