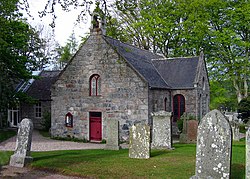 The B979 road runs through Maryculter. There are two hotels: The Old Mill Inn, a former coaching inn that dates back 200 years, and Maryculter House Hotel. At the edge of the village of Maryculter is a public forest land, known as the Oldman Wood, through which flows the Crynoch Burn. Also the children's theme park, StoryBook Glen, which also consists of a shop and restaurant is located near the old church which is still in use today as a Church of Scotland. Other notable vicinity buildings are the Lairhillock Inn and Muchalls Castle.

Prehistoric habitation in the Maryculter area is known through archaeological sites such as Balbridie situated somewhat west of Maryculter. Roman legions marched from Raedykes to Normandykes, marching slightly west of Maryculter, as they sought higher ground evading the bogs of Red Moss and other low-lying mosses associated with the Burn of Muchalls. That march used the Elsick Mounth, one of the ancient trackways crossing the Grampian Mountains,[1] lying west of Netherley.

This Kincardineshire article is a stub: help to improve Wikishire by building it up.