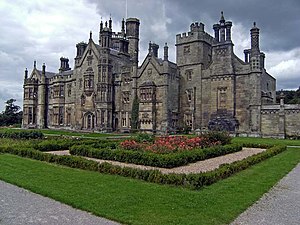 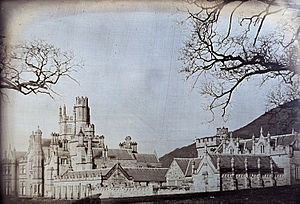 A whole-plate daguerreotype of Margam Castle taken by the Rev. Calvert Richard Jones (1802–1877) on 9 March 1841, the only daguerreotype by Calvert Jones known to have survived.

Margam Castle is a large Victorian-era country house, built in Margam, Glamorgan, for Christopher Rice Mansel Talbot (1803–1890). It was constructed over a ten-year period, from 1830 to 1840, on a site which had been occupied for some 4,000 years and which from the 11th century until the dissolution of the monasteries was an abbey.

Although called a "castle", the building is really a large comfortable country house, one of many "mock" castles built in the 19th century during the Gothic Revival.

After making a Grand Tour of Europe as a young man, Talbot returned to south Wales and from 1830 he set about redeveloping the family estate at Margam. The new castle was designed in a Tudor Gothic style by the architect Thomas Hopper (1776–1856), while Edward Haycock Snr (1790–1870) was supervisory architect and designed parts of the interior and exterior of the house, the stables, terraces and lodges. Talbot also took a keen interest in the project, encouraging his architects to borrow elements from Lacock Abbey in Wiltshire (ancestral home of the Talbots and home to his cousin William Henry Fox Talbot) and Melbury House in Dorset (home of his mother's family, the Fox-Strangeways, Earls of Ilchester).

William Henry Fox Talbot was a frequent visitor to Margam, and the castle featured as an image in some of his early photographic experiments. Margam's links with photography also include being the location of the earliest known Welsh photograph, a daguerreotype of the castle taken on 9 March 1841 by the Reverend Calvert Richard Jones.

After the death of Emily Charlotte Talbot, the daughter of its first owner, the castle passed to her nephew and continued to be used by the Talbot family until 1941, when it was sold. David Evans-Bevan, who bought it, found it too large to live in, but could not find any public organisation interested in taking it on, and it fell into disrepair. For many years it belonged to the local authority, but was not open to the public. In 1977, a fire caused substantial damage, and it was only after this that a restoration project began in earnest.

Today Margam Castle is a Grade I listed building and is in the care of the local council.

Margam Castle was visited by the television programme Most Haunted in its 2006 series and also by SyFy's Ghost Hunters International in 2010.[1] It has become a very popular venue for paranormal investigation events groups. In 2013 the Margam Ghost Walk (which seeks to explain the stories of the reputed hauntings but which does not undertake paranormal investigation) became the most popular attraction in the Neath Port Talbot authority area, according to the review website Tripadvisor.