Manorhamilton is the second largest town in County Leitrim. It is located on the N16 road between Sligo, 16 miles away, and Enniskillen 25 miles away.

Before the Plantations of Ireland the settlement was known as Clooneen[2] (from the Irish Cluainín Uí Ruairc, meaning 'Uí Ruairc's small meadow'). This lay on the west bank of the Owenbeg. Uí Ruairc (Anglicised as O'Rourke) was the local Gaelic chieftain based in nearby Dromahair whose land was seized by the English and then granted to Sir Frederick Hamilton for his services in the European wars of the 17th century. As a result of his actions Hamilton to this day is considered to have been a tyrant by the local people. He began building a new town on the east bank of the river, in the townland of Clonmullen, which he renamed Manorhamilton.[2] After the town emerged, the name Baile Hamaltuin was adopted by Irish speakers and its anglicised form Ballyhamilton was used by English speakers for a time.[2] 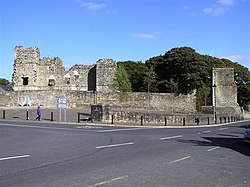 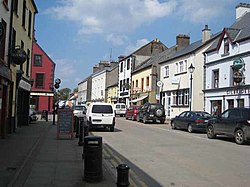 Like most rural Irish towns, Manorhamilton is seeing considerable social and physical change. Farming is still a dominant sector yet traditional industries and livelihoods are being replaced by new forms of economic activity. Construction in the area is recently underwent a boom time with hundreds of new homes having been built. The recent recession has brought an end to the building boom.

The Wild Rose and Thorn Festival brings large crowds to Manorhamilton each August.

Manorhamilton has several pubs with music, craic and nightlife. The area is renowned for traditional Irish music and regular sessions take place in 'Biddy's, 'Heraghty's' and 'The Castle'.

Splódar are a professional theatre company based in the Glens Centre in Manorhamilton. Formerly known as 'The Glens Players' the company stages shows both in English and Irish. Splódar tours its work nationally and has also performed plays at Theatre Festivals abroad.

Drumlin Publications was formed by local author Prin Duignan to give a voice to emerging writers. The company has published many excellent books focusing on history and culture - both regional and national.

The ruins of Manorhamilton Castle[5] has recently been impressively renovated transforming it into a fascinating tourist attraction. The Castle was erected in 1634 by Sir Frederick Hamilton who was granted land in North Leitrim by the English government. The land had been confiscated from the O'Rourkes, the ruling clan of Breifne. Hamilton was a very unpopular overlord and faced frequent native rebellion before the Castle was burned by the Earls of Clanrickard (Burkes) in 1652. Manorhamilton Castle Heritage Centre hosts a permanent exhibition and offers guided tours of the Castle ruins and grounds.

Headquartered in Manorhamilton, The Greenbox[6] is Ireland's first integrated ecotourism destination. The area of the Greenbox includes the counties of Fermanagh and Leitrim, the West of Cavan, north of Sligo, south of Donegal and north-west of Monaghan. The organisation is involved in the development and promotion of eco breaks and hundreds of other activities.

The Bee Park Resource Centre is a recently built facility on the site of the former Community Centre. The centre has a large main hall which stages concerts and community events. The Bee Park Centre is also home to a large number of service providers in the areas of Youth, Sport, Disability & Childcare Education. The North Leitrim Women's Group and The North Leitrim Men's Group are also located here.

A spacious new paved public square has been developed adjacent to Manorhamilton Castle on the former fair green. The square which incorporates an outdoor performance platform has been further enhanced by the commissioning of an abstract sculpture, sourced from the local Leitrim Sculpture Centre.[7]

This plot is one of three graveyards opened shortly before and during the Great Famine of 1845 - 1849.

The North Leitrim area features many pre-historic sites of interest. Very accessible is the nearby O'Donnell's Rock plateau where many well-preserved stone forts and passage tombs are located. Cairns and other tombs are also visible on Benbo Mountain and at the summits of virtually all the surrounding mountains. On lower ground the remains of ringforts, cashels, tombs and many other structures are dotted throughout the landscape. Lisdarush Ring Fort is a well-preserved Iron Age site which can be seen just off the Rossinver road approximately two miles from Manorhamilton. 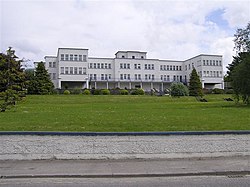 Our Lady's Hospital is located on the edge of the town. This HSE hospital provides a range of services and is focused on long-stay and day-care geriatric and rheumatology services.

Manorhamilton is home to regional Health Service Executive offices. These were, until recently, the headquarters of the regional North Western Health Board.

The town is served by a number of bus routes including the Sligo to Enniskillen route.

Manorhamilton railway station opened on 1 December 1880 and formed part of the Sligo, Leitrim and Northern Counties Railway (SLNCR). All maintenance on the line's engines and rolling stock was carried out at the station works and the railway became a major employer locally. The administrative headquarters of the SLNCR was located in the nearby village of Lurganboy. The railway served as a major business and tourism artery to the area and developed a large trade in livestock exports. The development of the modern roads system in Ireland led to the decline of railway usage and the consolidation of railways nationwide. The SLNCR, and with it Manorhamilton Station, finally closed on 1 October 1957.[8]

There are many sports and outdoors activities available in Manorhamilton.

The principal sporting and cultural organisation in the area is Glencar Manorhamilton GAA Club (Gleann an Chairthe Cluainín). The Glencar Manor senior team were the Leitrim Senior Football Champions in 1977,1999,2008,2009,2010 & 2011. The club's grounds are in the Bee Park and it has a strong underage structure competing successfully at all grades of Gaelic football and hurling in the county. The new club website[9] contains lots of information about the club and additional information on community events in the area.

Manorhamilton Rangers AFC participates in the Sligo Leitrim Junior soccer leagues. The club's 1st team have recently had successful campaigns in national cup competitions. Manor Rangers[10] pitch is located in the Bee Park sports grounds in the centre of the town.

Manorhamilton Tennis Club have recently developed all-weather courts in the Bee Park sports grounds. Weekly adult and children's games take place throughout the year. Teams from the club also participate in the Connacht Tennis League. Coaching sessions are regularly organised for new members and the Parks Tennis League is run for children every summer.

Sean McDermott Boxing Club has a strong tradition in the town with boxers from the club having reached National Finals on several occasions. In 1993, James Kelly from Church Lane, Manorhamilton won the All-Ireland Youth 92+kg event, James went on to represent Ireland in Europe. In 2014 Niall Gallagher from Creevelea, won the All-Ireland Youth 92+kg title and Latvian native Dita Kodolina from Blacklion claimed victory in the ladies Irish Novice 54 kg event

The Holey Soles Hillwalking Club organise an annual North Leitrim Glens Hillwalking Festival, which attracts large numbers of walkers from all over the country. 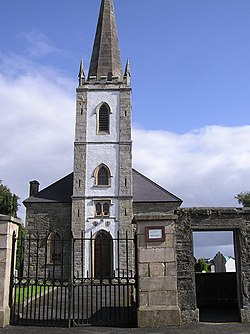 Church of Ireland in Manorhamilton.