Mallow is a town in the East Riding of County Cork, about 22 miles north of Cork. Mallow is in the barony of Fermoy. It is the administrative centre of north County Cork and has been nicknamed the "Crossroads of Munster". The Northern Divisional Offices of Cork County Council are located in the town.

The earliest form of the name is Magh nAla, meaning "plain of the stone".[2] In the anglicisation "Mallow", -ow originally represented a reduced schwa sound, which is now however pronounced as a full vowel.[3] In 1975, Mala—a shortening of Magh nAla—was among the first Irish placenames adopted by statute,[4] on the advice of the Placenames branch of the Ordnance Survey of Ireland.[5][6]

In the Annals of the Four Masters, compiled in the 1630s, Magh nAla is misrepresented as Magh Eala, the Donegal-based authors being insufficiently familiar with Cork places.[7] P.W. Joyce in 1869 surmised that in Magh Eala (sic), Ealla referred to the river Blackwater, and connected the name to the nearby barony of Duhallow.[7] Professor T. F. O'Rahilly in 1938 interpreted Magh Eala as "plain of the swans".[7] This false etymology remains widely cited and has caused resentment of the official Mala as being a gratuitous simplification of Magh Eala.[7] However, the name Mala has been used in Irish for more than 300 years.[2]

Evidence of pre-historic settlement is found in Beenalaght (8½ miles south-west of Mallow), where an alignment of six standing stones lie on a hill to the west of the Mallow-Coachford Road.[8] (52°2’9"N, 8°45’4"W[9])

During the Irish War of Independence, the town was the HQ of the North Cork Militia – known as North Cork Rifles. The town's RIC barracks was the only one captured nationwide during the war. In retaliation, several main street premises were subsequently torched by the British Army.

Mrs King, wife of Captain W H King, RIC was killed during an attack on her husband near Mallow Railway station. In retaliation, British military and Black and Tans killed three railway workers-Patrick Devitt, Daniel Mullane and Bennett. The killings prompted industrial action by the National Railworkers Union in Britain and Ireland.[10]

Some of the highest naturally occurring readings of radon ever have been recorded in Mallow, prompting local fears regarding lung cancer.[11][12]

The urban area has a population of 7,864 (2006 census) and with improved road and rail since the mid-1980s, has developed significant student and worker commuter traffic with Cork city

Mallow developed as a defensive settlement protecting an important fort on the River Blackwater. Mallow developed in the late 16th century as a plantation town. It has prospered throughout the centuries as a market town due to its rich agricultural hinterland. Irish statesmen such as Thomas Davis and William O'Brien were both born in Mallow in the 19th century. The main street in Mallow is called Davis Street (although commonly referred to as Main Street), and joins with William O'Brien Street outside Mallow Town Hall. At the point where Davis Street meets O'Brien Street there is a monument to J.J. Fitzgerald, a little-known local politician who was instrumental in establishing both Mallow Urban District Council and Cork County Council. ,.

The town developed a significant industrial base in the early 20th century, based largely on its agricultural capability, with dairy produce and sugar beet supplying the Sugar Factory, Rowntree Macintosh, Bournes and Dairygold. Changes in the European Union sugar subsidy programme resulted in the closure of the Sugar Beet factory in mid-2006, after 75 years continual production. One of the last sugar beet plants to be closed in Ireland. 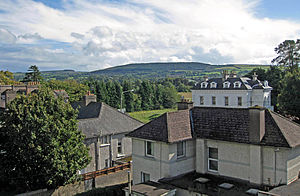 Mallow is also served by the Citylink Galway-Cork Airport service.

The Mallow railway viaduct which straddles the Blackwater, commonly known as the "Ten Arch Bridge", was bombed and destroyed during the Irish Civil War. It was rapidly rebuilt in girder form due to its importance in connecting the Cork, Tralee and Dublin lines. An additional line east through Fermoy and Lismore to the Waterford South station closed in 1967. Mallow railway station was opened on 17 March 1849.[13] by the Great Southern and Western Railway. It is currently served by trains to via Limerick Junction to Dublin Heuston, Cork and Killarney, Farranfore and Tralee.

Onward connecting trains link Mallow via Limerick Junction to Limerick, Ennis, Athenry and Galway as well as Carrick-on-Suir and Waterford.

Mallow Racecourse, now known as Cork Racecourse, became an emergency airfield on 18 April 1983, when a Mexican Gulfstream II business jet piloted by Captain Reuben Ocaña made a precautionary landing. A temporary tarmacadam runway of 3,000 ft in length which was paid for by the plane's insurers was laid to enable the aircraft to leave five weeks later, whereas in the meantime Captain Ocaña became a local celebrity. On 23 May 1983 just before the plane departed, the Captain said his farewell to the people of Ireland in the Irish language.[14] The runway was subsequently utilised for parking during race meets and was a popular facility for learner driving. Light aircraft have occasionally landed at the racecourse on the grass area. The F3A World Model Aircraft Aerobatic Championship was held there in 2001. The 1983 incident formed the basis of the 2010 film The Runway.[15]

Mallow has a cinema as well as other community amenities such The Youth Centre as well a nearby swimming pool. It also has several gyms and a driving range situated a few kilometres from the town centre.

The town also has several pubs and night clubs to cater to mainstream demographics. No facilities for original or independent art, music and culture exist as of this time. 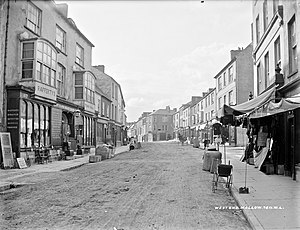