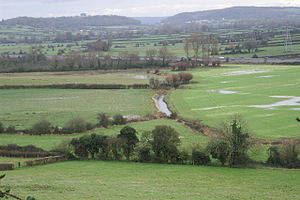 The Lox Yeo is a short river in Somerset. It rises at Winscombe and flows south west for about 4 miles to join the River Axe near Loxton.

The river flows through a gap in the Mendip Hills between Crook Peak and Bleadon Hill, through which the M5 motorway now runs.

The Lox Yeo is one of several rivers called the River Yeo in Somerset and Devon. The name Yeo is from the Old English word ea, meaning simply "river". It is said that the river was once known simply as the Lox. “Lox” may be of Old Welsh origin, in which language it would indicate either "winding stream"[1] or "bright one"[2].