Loxton is a village in Somerset close to the M5 motorway. The parish, which includes the village of Christon, has a population of 192. The parish is part of the Winterstoke Hundred.

Loxton takes its name from the Lox Yeo River (once simply known as the Lox), on which it is situated. The village is mentioned in the Domesday Book as Lochestone.[1]

The village has been populated since Norman times. Old mine-workings on the hills indicate that at one time mining was abundant, probably for calamine, lead, copper and more recently yellow ochre.

During the construction of the M5 motorway a Roman or pre-Roman settlement was uncovered at Christon.[2]

Christon Court has mediæval origins, but the current building dates from the 17th century.[3]

In 1954 the village came to national attention when Miss Noreen O'Connor, a nurse, killed Friederika Alwine Maria Buls by "plucking out" her eyes. She was tried for murder and found guilty but insane.[4]

The Mendip Way long-distance path passes through the village. 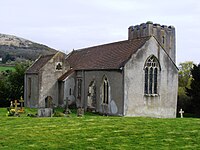 The Parish Church of St Andrew in Loxton dates from the 11th century and is a Grade II* listed building.[5]

The Church of St Mary in Christon dates from the 12th century and is a Grade I listed building,[6]