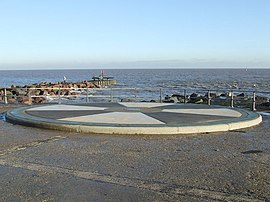 Lowestoft Ness, also known as Ness Point, is the most easterly point of the United Kingdom and of the British Isles. It is barely a headland but a small bump in Suffolk's smooth coast, and is found in Lowestoft in Suffolk. A little to the north of the town centre and today it has a direction marker, known as Euroscope, marking locations in other countries and how far away they are from the Ness.[1]

Plaque marking the easternmost Point of the British Isles