Long Marston is a small village to the north of Tring in Hertfordshire. It is located roughly 5 miles east of Aylesbury and 11 miles north-west of Hemel Hempstead.

The name of the village is likely to derive from Mershton or "Marsh Village", a reference to its propensity for flooding.[1] By 1751 the name is found as Long Marcon.[2]

R M Healey in the 1982 Shell Guide was not too impressed by Long Marston's wilder aspect:

Straggling crossroads place stuck in the dullish, well-watered flatlands north of Tring. The ruined, ivy-covered flint tower is all that remains of a deserted mediæval church - a must for the modern-day follower of the Tour of Dr Syntax (Rowlandson). A new church, uninspired in itself, incorporates fragments of the old - chancel arch and windows - and also the Perpendicular aisle piers from Tring parish church. In the main street are plain cottages, a bit of timber-framing and weather-boarding in good harmony. Some thoughtless new development.[3]

In 1751 the village pond was, so it is said, the scene of England's last witch-lynching. Ruth Osborn, the alleged witch, was captured and drowned. The law however descended to punish this deed and one of her tormentors ended up hanged at the gibbet at Gubblecote Cross a mile and a half east of the village, close to the moated site of a deserted mediæval village.[3]

Long Marston’s primary school[4] was built after the original school, built during the Victorian era, was bombed during World War Two. The current school, built in 1951, has gradually grown and extended with the village and its population. 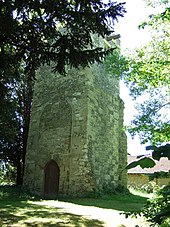