Llansteffan Castle is a castle overlooking the River Towy as it enters Carmarthen Bay near the village of Llansteffan in Carmarthenshire.

The castle is now in the care of Cadw.[1]

The site is near the Well of St David and Plas Llanstephan.

The castle sits on a much older Iron Age promontory fort, proving Llansteffan has been inhabited for several millennia.[2] The hill's summit can only be reached from one side, and the hill where the castle/fort stands commands the entrance to the River Towy (unlike today, the hill would have been stripped of trees to make foot soldiers vulnerable to attack by archers). The original earthworks can still be seen and were used as part of the modern castle's defence system—the castle proper rests within the earthwork rings.

Norman period and after 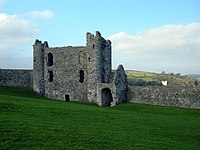 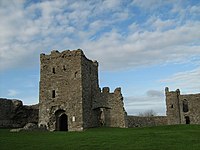 The castle was built by the Normans after 1100 as part of their invasion of Wales and granted to the Marmion family before passing to the de Camvilles through marriage.[3][4]

Llansteffan was captured by Maredudd ap Gruffydd in 1146[5] against the forces of Maurice FitzGerald, Lord of Lanstephan and his brother William FitzGerald, Lord of Emlyn who were the leading Norman lords of the region. The castle was retaken by the Normans in 1158.[5] Llywelyn the Great of Gwynedd took the castle in 1215 (while England was convulsed by civil war) and it was taken back by the de Camville family at some time after 1223. The castle fell to Llywelyn ap Gruffudd in 1257 but returned to the de Camvilles by the 1260s.[5]

By 1367 Llansteffan Castle was described as in a poor state.[5]

The castle later fell to the Crown and the two-tower Gatehouse was converted into a residence.[5]