Llanegryn is a village and parish in Merionethshire located within the Snowdonia National Park south of the Snowdonia range. Travelling by road, it is around four miles} north-east of Tywyn and 17 miles south-west of Dolgellau. The nearest railway stations are at Tonfanau and Llwyngwril, both less than three miles away.

Llanegryn is named for St Egryn, with llan meaning church or parish – a common feature in Welsh-language place names. The village lies in the Dysynni Valley.

History of the area

The Dysynni Valley, originally a river delta of the Afon Dysynni, was largely drained from the late 1700s on – notably by the Corbet family at Ynysymaengwyn – creating a flat, fertile valley, several miles in width. There is likely to have been much earlier settlement on surrounding high ground for sheep rearing and agriculture. An Iron Age fort is located towards the east end of the valley.[1] 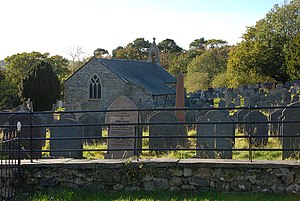 There has been a recorded settlement around St Mary and St Egryn church at Llanegryn since the 13th century, with the first record of the church being in 1253/4.[2] This notable mediæval Grade I-listed building contains a fine carved rood screen, dating from about 1520 – considered to be among the finest in Wales. It has been suggested this may come from Cymer Abbey.[2] It also contains a 12th-century font and a surviving medieval window on the north wall of the nave, although the church underwent substantial restoration during the 19th century.[3][4][5]

The village's Methodist chapel was built in 1811, enlarged in 1848 and rebuilt 30 years later in the simple Gothic style with gable entry.[6]

Today, the population of Llanegryn is approximately 400, including outlying houses and farms. Primary sources of income are farming and tourism, with several caravan parks being located throughout the Dysynni valley, particularly on the Peniarth estate. The village attracts hikers and walkers, due to its location near to Cadair Idris mountain and Craig yr Aderyn (meaning "Bird Rock"), which is notable as an inland site where cormorants breed.[8] Other local landmarks include Castell y Bere, constructed by Llywelyn the Great in the 1220s.[9]