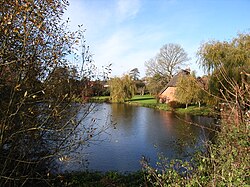 Chilton Foliat is a village and parish on the River Kennet in Wiltshire. The civil parish lies entirely in Wiltshire, but the ancient parish extends into Berkshire, including the village of Leverton and the Chilton Lodge estate.

The parish is in the North Wessex Downs Area of Outstanding Natural Beauty. about a mile and a half north-west of the market town of Hungerford.

The village is on the B4192 Hungerford-Swindon road. This was the A419 until 1977, when it was redesignated after the opening of the M4 motorway.[2]

The parish includes the hamlets of Straight Soley and Crooked Soley.

Chilton Aircraft, a small manufacturer in the 1930s and 1940s, had its factory within the Chilton Lodge estate. 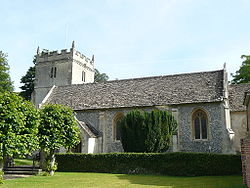 The Church of England parish church of Saint Mary dates from c. 1300. Restoration by Benjamin Ferrey in 1845 included the addition of a south aisle. The church was designated as Grade-II* listed in 1966.[3]

The churchyard has an early 19th-century mausoleum to the Pearse family, designed by William Pilkington and described by Pevsner as "heaviest Grecian".[4][5]

The church was the location of the 2008 memorial service for Gerald Ward, godfather to Prince Harry; the service was attended by the Prince with the Prince of Wales and the Duchess of Cornwall.[6]

Houses in the village include Vine Cottage, from the late 17th century.[8] The Old Rectory, close to the church, is from the mid 18th century.[9] Bridge House carries a date of 1766 but incorporates earlier work.[10]

The gateway leading to Chilton Lodge, and part of its parkland, are on the Wiltshire side of the border. The house itself, built in 1800 and Grade-II* listed, are in Berkshire.[11] It replaced an earlier house on the Wiltshire side, which was demolished. Chilton Park Farm, a house in neo-Georgian style, was built on that site in 1940;[2] nearby is an early 18th-century barn.[12]

Littlecote House, a Grade-I-listed country house completed in 1592, now a hotel and leisure centre, is a mile upstream on the other site of the Kennet in Ramsbury parish. Part of its estate is in Chilton Foliat parish.

A Church of England primary school serves Chilton Foliat and nearby villages. A National School opened in 1835, and in 1847 moved to the north side of the main street. In 1970 the school moved to a new building at Stag Hill.[15]

Much of the Kennet floodplain within the parish has been designated as a Site of Special Scientific Interest (SSSI), owing to the presence of the rare Desmoulin's whorl snail. An area of watermeadow south-west of the village, Chilton Foliat Meadows, is also an SSSI for its diverse flora and variety of birds.

The 1987 BBC Television programme The Victorian Kitchen Garden, featuring head gardener Harry Dodson (1919–2005), was filmed at Chilton Lodge which lies between Chilton Foliat and the Berkshire hamlet of Leverton.[16]

Chilton Foliat is referred to in the HBO series Band of Brothers as the location where Captain Herbert Sobel was sent to train non-combat military support personnel who needed paratrooper training.