Little Thetford is a small village in Cambridgeshire 3 miles south of Ely on the main Cambridge-Ely road, the A10.

The village is built on a boulder clay island surrounded by flat, drained fenland countryside, typical of settlements in the Great Fen.

The 10th-century Old English name, Lytel Þiutforda, suggests a ford across the nearby River Great Ouse, which today forms most of the village's eastern boundary.

St George's Church is a 14th-century stone building with slate roof.[1] The roof was thatched until 1863, when the church was heavily restored.[2] In 1886, it was struck by lightning and required extensive rebuilding.[3]

There is evidence of settlement on the island since the late Neolithic Age; a Bronze Age causeway linked the village with the nearby Barway, to the southeast. An investigation, before a 1995 development in the village, discovered a farm and large tile-kiln of Romano-British origin; further investigations uncovered an earlier settlement of the Pre-Roman Iron Age. The Roman road Akeman Street passed through the north-west corner of the parish, and the lost 7th century Anglo-Saxon village of Cratendune may be nearby.[6][7]

In 1007, an Anglo-Saxon noblewoman named Ælfwaru granted her lands in Cambridgeshire and Norfolk, including the "land at Thetford and the fisheries around those marshes", to the abbots of Ely Abbey; the village was still listed as a fishery in the Domesday Book, 79 years later. Pasture farming, and harvesting of reeds, peat, and rushes were the other dominant activities of the time.

In the Middle Ages there was a windmill in Thetford Field, west of the main built up area of the village.[8] This may have been the site of the look-out tower that village legend says had been used during the Norman Conquest by Hereward the Wake's defence of the Isle of Ely; a deserted settlement at this location may once have been the centre of the village.[9] The stump of a late mediæval (roughly 1540–1900 AD) windmill in the present centre of the village was converted into a house. The site of this mill is where the Roundhouse still stands to this day.[10]

The Harrimere windmill was on the east bank of the River Great Ouse at Barway. The chain ferry linked Barway with Little Thetford.

The draining of the land began in the 17th century, turning the waste marsh into the rich farmland it is today. During the late 19th century, coprolite, a phosphate-rich fossil used as a fertiliser, was mined in shallow pits around the village.

Little Thetford resisted moves in Parliament to pass Inclosure Acts for seven years during the reign of William IV, which may have led to the strong Baptist following amongst the poor of the village. Little Thetford's common land was eventually inclosed under an Inclosure Act in 1844.

The river flooding, which affected so muc of the country during March 1947, caused the Great Ouse to break its banks at Little Thetford. Heavy rain following a very severe winter overwhelmed multiple rivers throughout Britain in the worst flooding in over two hundred years. 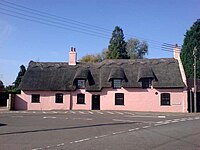 Drainage and the Fens 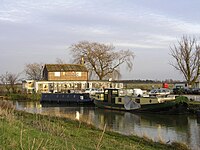 The Fish and Duck on the Great Ouse

There are many man-made waterways, or lodes nearby, including Wicken Lode and Soham Lode. Researchers suggest the Fenland Lodes are Roman in origin—almost certainly Soham Lode.[11] Other researchers disagree, presenting a case for such lodes being Anglo-Saxon or later.[12] The Thetford catchwater (drain), dug in 1838, runs southwest to northeast around the eastern edge of the built-up part of the village. It drains by gravity, into the River Great Ouse north-east of the village, at the Braham Dock drain.

The 4th Earl of Bedford carried out extensive venture-capital led Fen draining schemes during the 17th century. The Fens continue to be drained to this day. Wicken Fen, one of Britain's oldest nature reserves, is two miles southeast of the village. 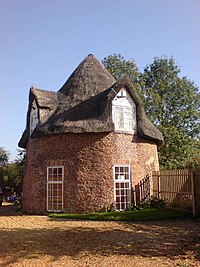 The Round House is thought to be a late 15th-century dovecote.[13] A policy of insurance exists dated July 1793, which is the earliest known written record of the house.[14] Other sources suggest the Round House is an 18th-century thatched cottage, similar to the South African rondavel.[15] A further source classifies this building as a post-mediæval, 1540–1900 AD, windmill.[16] A family of 13 children lived in the building during the 19th century.

The Horseshoes is a Grade II listed residential thatched cottage, which was originally the Three Horseshoes public house, a 17th-century pink-painted cottage built to follow the curve of the road.[17] April Thatch is a former public house, now a Grade II listed residential property. This white-painted early 18th-century cottage used to be the Rose & Crown.[18] 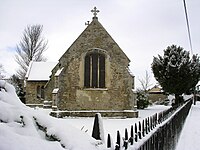