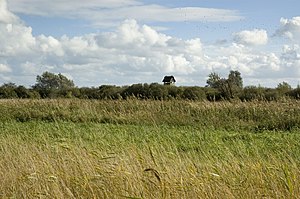 Wicken Fen is a wetland nature reserve situated near the village of Wicken in Cambridgeshire.

Wicken Fen reserve is one of only four wild fens which still survive in the enormous Great Fen Basin area of East Anglia, the rest of the land, some 99.9% of the former fens, having been reclaimed by drainage for arable cultivation. The reserve includes a variety of habitats once found throughout the Great Fen, including fenland, farmland, marsh, and reedbeds.

Wicken Fen is one of Britain's oldest nature reserves.[1] On 1 May 1899, the National Trust bought two acres of land for £10 and has been buying land as it becomes available for over a century. As of 2010 the reserve extends to 1,863.4 acres.

Naturalists were originally drawn to Wicken because of its species richness and the presence of rarities. The Fen has therefore received a great deal of recording effort and huge species lists have accumulated. Many nationally rare species have been recorded. Indeed, in 1998 over 20 species new to the Fen were recorded for the first time and in 2005 another 10 were added. Many of these lists can be downloaded from the fen website (see below). It was established as a nature reserve because of its invertebrate and plant interest. Over 8,000 species have so far been recorded on the fen, including more than 125 that are included in the Red Data Book of rare invertebrates.[2]

The reserve supports large numbers of fly, snail, spider and beetle species. Damselflies found here include the emerald, azure, large red, red-eyed, variable and common blue; together with dragonflies such as the southern and brown hawkers, emperor, hairy dragonfly and black-tailed skimmer. The Lepidoptera fauna is very rich also, especially the moths, with over 1000 species. The nationally rare reed leopard moth is common at the site. Other local moths include cream-bordered green pea, yellow-legged clearwing and emperor. China-mark moths such as the small, brown and ringed are also seen here. Local butterflies include the green hairstreak, brown argus, speckled wood and brimstone. Snails include the Desmoulin's Whorl Snail.[2] 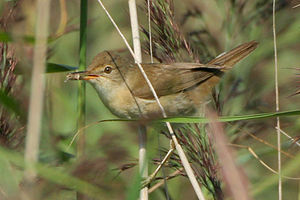 A reed warbler at Wicken Fen

The site is mainly noted for its plants and invertebrates, but many birds also can be seen, and these are particularly popular with visitors as they are often easier to observe than the more elusive insects and plants. Bird species recorded living at the site include great crested grebe, cormorant, gadwall, teal, sparrowhawk, water rail, kingfisher, snipe, woodcock, great spotted and green woodpeckers; and barn, little, tawny]], long-eared and short-eared owls. Visiting birds include bittern, whooper swan, golden plover, garganey, pochard, goosander, marsh harrier, hen harrier, merlin and hobby. In season, it is most unlikely that visitors will fail to hear the 'drumming' of snipe.[2] 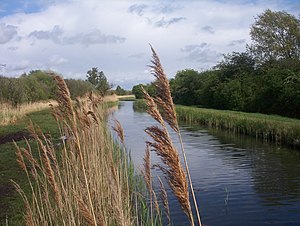 Wicken Fen is divided by a man-made watercourse called "Wicken Lode". The area north of Wicken Lode, together with a smaller area known as Wicken Poors' Fen and St Edmunds Fen, forms the classic old, undrained fen. The designated National Nature Reserve of 660 acres also includes the area around the Mere, to the south of Wicken Lode. These areas contain original peat fen with communities of carr and sedge. They support rare and uncommon fenland plants such as marsh pea, Cambridge milk parsley, fen violet and marsh fern. This part of the Fen can be enjoyed from a series of boardwalks.

The area south of the Lode is Adventurers' Fen and consists of rough pasture (grading from dry to wet grassland), reedbed and pools.

The dykes, abandoned clay pits and other watercourses carry a great wealth of aquatic plants and insects, many of which are uncommon elsewhere. 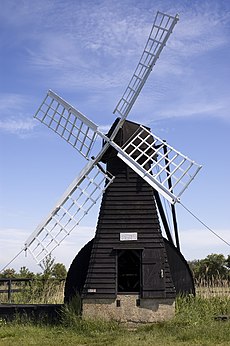 Although it is often described as a natural wilderness, it is neither natural nor a wilderness as people have been closely involved in the fen for centuries and the reserve is managed intensively to protect and maintain the delicate balance of species which has built up over the years. Much of the management tries to recreate the old systems of fen working which persisted for hundreds of years, allowing species to become dependent on the practices. For example, sedge is harvested every year and sold for thatching roofs. The first recorded sedge harvest at Wicken was in 1414. Ever since then, sedge has been regularly cut. This has allowed a pattern of plants and animals to build up who depend on regular clearance of the sedge to survive. Many plants and animals are dependent upon regular management of vegetation in this way to keep their habitats going. Konik ponies and highland cattle have now been introduced to parts of the fen to prevent scrub from regrowing as a part of the management plan.

The present appearance of Wicken Fen is the result of centuries of management by human beings. Many of the practices now undertaken have changed little since mediæval times. In surrounding areas, the landscape has changed so completely that it is almost impossible to imagine how it must once have all looked. Only a very few places survive where it is possible to experience this primitive landscape first hand; Wicken Fen is one of these.

The National Trust has now cast covetous eyes over a further 12,000 acres of Cambridgeshire (19 square miles). Its published "Wicken Fen Vision" is to take over all the prime agricultural land and common land from Wicken south into Stourbridge Common in Cambridge itself, with the intent to flood the fields and turn it back into fenland. The plan involves acquiring this land over a 100-year period.

In 2001 a major acquisition was made with the purchase of Burwell Fen Farm (410 acres). In 2005, a 250-acre turf farm, renamed Tubney Fen, was acquired. Latest acquisitions include Hurdle Hall Farm and Oily Hall Farm. The National Trust aims to acquire further land as it becomes available.[3]

Enlargement of the reserve has faced criticism from some residents of nearby settlements. An on-line petition entitled 'SaveOurFens' states "We the undersigned petition the Prime Minister to Stop the National Trust flooding or junglefying our Cambridgeshire Fens!". Concerns are centred around the issues of loss of agricultural land and increases in levels of local traffic and mosquito populations.[4] 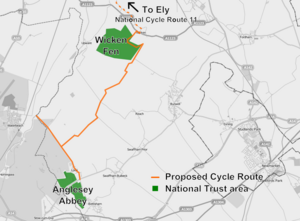 As part of the Vision project, the National Trust, in conjunction with Sustrans, are building a new sustainable transport route connecting Wicken Fen with Anglesey Abbey. The new walking, cycle and horse riding route when complete will bridge the gap in the existing Sustrans National Cycle Route 11 between Cambridge and Ely. The project includes the construction of a series of new bridges over the man-made waterways known as lodes. In July 2008, the new Swaffham Bulbeck Lode bridge and a half-mile cycle and bridleway path across White Fen were opened. Upgrades to the crossing of the River Cam at Bottisham Lock and the bridge over Burwell Lode are planned as well as the construction of a new crossing over Reach Lode and of a cycle way across Burwell Fen.[5] The total cost of the scheme is £2 million, £600,000 of which are from Sustrans's Connect2 scheme.[6]

The Spine Route is scheduled for completion by 2011.[7]

The Fen has been long associated with natural history. Many eminent Victorian naturalists collected beetles, moths and butterflies at Wicken Fen and some of their collections can still be found in Museums. From the 1920s onwards the fathers of modern conservation, the Cambridge botanists Sir Harry Godwin and Dr Arthur Tansley carried out their pioneering work on the reserve. One of the world's longest running science experiments, the Godwin Plots, continues at the Fen to this day. The Fen’s long association with science, especially nearby University of Cambridge, continues to the present day with scientists actively involved in the management of the reserve, and many hundreds of research papers published about the fen over more than a century. A Bibliography can be downloaded from the Wicken website and the latest Newsletter.[8]

The Fen is open to the public. The site is open all year round from dawn to dusk except for Christmas Day. Some paths are closed in very wet weather, and some areas are inaccessible. However, there is a boardwalk, leading to two bird hides that is open all of the time. There are several bird hides and many miles of trails for visitors to follow. There is a visitor centre, shop and café. The visitor centre has a permanent exhibition of information about Wicken Fen, its history and ecological importance. The Fen Cottage is open on Sundays, showing the life of fen people at the turn of the last century.