Leswalt is a village in Wigtownshire, on the ridge of the Rhinns of Galloway between Loch Ryan and the open sea of the North Channel, between the Portpatrick and Stranraer. The parish of Leswalt covers around 8 square miles.

"Leswalt" is a name of unknown origins. Possible derivations for its name include Welsh language|Welsh llys gwellt, meaning "grass court", or perhaps the Irish Gaelic lios uillt, meaning "fort of the glen", referring to Lochnaw Castle.[1]

In ancient times the parish belonged to the monks of Tongland Abbey.

In 1390 Archibald Douglas, 3rd Earl of Douglas, granted lands at Leswalt to his illegitimate son or relative, William Douglas of Leswalt. William Douglas was self-styled "Lord of Leswalt", and Sheriff of Wigton, but was dismissed by Margaret, Duchess of Touraine, daughter of King Robert III and wife of Archibald Douglas, 4th Earl of Douglas, as part of a power struggle in Galloway. Under duress he transferred lands at Lochnaw to Andrew Agnew, constable of Lochnaw Castle, receiving Cruggleton Castle in exchange.

Andrew Agnew had been made hereditary constable of Lochnaw Castle by William Douglas of Leswalt in 1426.[2] He received several charters from James I of Scotland, including one of 31 January 1431, confirming to him and his heirs the office of heritable constable of Lochnaw, with the whole lands and "Barony of Lochnaw". In 1451 Andrew Agnew was confirmed as Hereditary Sheriff of Wigtownshire. In 1458 he was paid as sheriff.[3]

In 1463 when George Douglas of Leswalt (son of William Douglas of Leswalt and Katherine Maxwell) died, the lands of Leswalt and Cruggleton reverted to the Crown, as a consequence of the forfeiture of all of the properties of the Earl of Douglas in 1456. They were appropriated by Mary of Guelders, the Queen Mother, widow King James II, and were subsequently claimed by Gilbert Kennedy (later Lord Kennedy), a half-brother to George Douglas, for his son, John Kennedy. These passed to his son, Alexander Kennedy, who made them over to his brother, David Kennedy, 3rd Lord Kennedy, from whom the Earls of Cassilis are descended.

Salt was produced in Leswalt from 1637, at Salt Pan Bay. 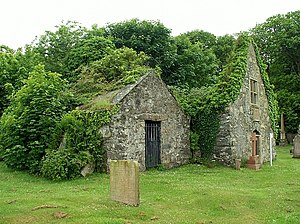 The Old Kirk of Leswalt, now ruined, is of mediæval origin, having been given to the monks of Tongland Abbey in the 14th century. The adjoining Agnew Aisle dates from the 17th century.

In 1828 the present church was built and the old one abandoned.[4]

Lochnaw Castle was home to the Agnew family. The ruins of the Old Castle stand on an island in Lochnaw Loch, and date to the 13th century.[5] The present castle incorporates a 16th-century tower house, but is largely the result of remodelling in the 18th century.[6]

Rev. George Wilson's Archaeological and Historical Collections relating to Ayrshire and Galloway list several forts in Leswalt; the Rhinns are a hotspot for these defences.

'The island in Lochnaw or Loch Naw is a fort site: the loch has been drained and refilled in its long lifespan, once held an 11th-century castle fort, taken and dismantled in 1390 by Archibald the Grim (Archibald Douglas, 3rd Earl of Douglas).

A Mote stood by the side of lake of Lochnaw. In 1791 Sir Stair Agnew used its materials to form a new approach.

Galdenoch Castle (dated 1547) was home of Gilbert Agnew of Lochnaw until 1570.