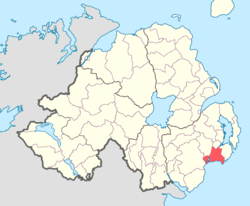 Lecale Upper is a barony in County Down.[1] To its south lies the Irish Sea, and it is bordered by three other baronies; Lecale Lower and Kinelarty to the north; and Iveagh Upper, Lower Half to the west.[1]

The Mac Duinnshéibhe (MacDunleavy, Dunleavy) sept where a royal family of Ulidia and are noted in this area.[2][3] John de Courcy in the 12th century would drive them out of Ulidia from where they fled to County Donegal.[2]

The Russells of Downpatrick can trace their Norman heritage back to the 12th century having been recorded in the area since Osberto Russell accompanied John de Courcy in 1177 into Ulster.[2]

Below is a list of the towns and villages in Lecale Upper:[5][6]