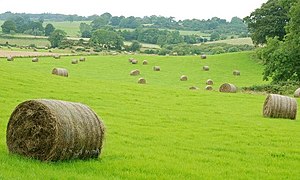 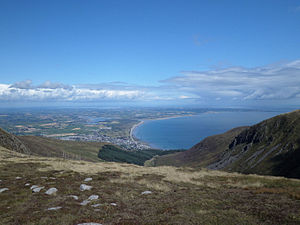 Lecale is the name of a peninsula of County Down, and that of several different historical territorial divisions all located there.

Lecale is an area of historical and geographic significance, bounded by the Quoile Marshes (now drained, but formerly extensive), the Blackstaff River, the Irish Sea and Strangford Lough. It has an oddly isolated position, virtually cut off from its hinterland, but open to invasion and influence from the east and south.[1]

Anciently this was the name of the Irish district of Leath Cathail: the name means "Cathal's half". As Ladcathel it was a county of the Earldom of Ulster, and later the name of the old Barony of Lecale, which was then split into Lecale Lower and Lecale Upper by 1851.[2] 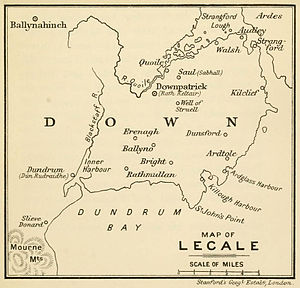 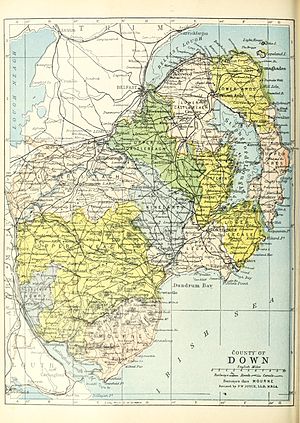 Map of Lecale within the surrounding baronies of County Down (1900)

Leath Cathail is said to consist of the present-day baronies of Lecale Lower and Lecale Upper,[4] and was a subdivision of the ancient kingdom of Uladh. It gets its name from Cathal, a prince of Uladh about 700 A.D. who was a descendant of Fiachna, a son of Deaman, a king of Ulidia.[4][5][6] Hence Leath Cathail literally means "Cathal's half of Dál Fiatach".

More anciently Leath Cathail was known as Magh Inis, meaning the "island plain", with the name "Isle Lecale" still used in the area.[4][5] These names reflect that until the first sea barriers and drainage systems where constructed about 200 years ago, that Lecale was almost entirely encircled by Dundrum Bay, Strangford Lough, and the Irish Sea.[5]

The Cenél Aengusa are also noted as being kings of Leath Cathail, with the Ua Flathraoi cited as lords by the 12th century.[4] According to the Annals of the Four Masters, on the day of the Festival of Paul and Peter (29 June), 1147, the Ulidians gave battle to the Cenél nEógain of Tír Eoghain (Tyrone) who had pursued them to the shores of Dún Droma (Dundrum Bay), Leath Cathail.[7] The Ulidians suffered a heavy defeat, including the death of Archu Ua Flathraoi, "lord of Leath-Chathail", with the victorious Cenél nEógain plundering Lecale and taken off with Ulidian hostages.[7]

This Dún Droma ("fort of the ridge"), is now known as Dundrum, and is called Dún Droma Dairinne, the "fort of Dairinne's ridge", in a poem by Gilbride MacNamee, a bard of the Cenél nEóġain.[7] This poem, written to lament the death of Bryan O'Neill, and the defeat of the Irish rebels at the Battle of Downpatrick in 1260, boasts of their victories over their enemies and makes mentions the victory over the Ulidians, however in reference to the battle of Downpatrick, the bard would lament "Alas! We have paid for it".[7]

Dundrum Castle, which now occupies the original dún or earthen fort, is said to have been built for the Knights Templar by John de Courcy, and they are said to have held it until 1313 when their order was suppressed. It was afterward granted to the prior of Down.[7]

St Patrick, so it is believed, landed at the Slaney estuary on his return to Ireland. A large granite statue of him looking into the rest of Ireland at Raholp today overlooks the site. He died at the Abbey of Saul where he began his mission and was administered his dying communion by Bishop Tassach of Raholp. His remains were carried to Downpatrick, then known as Dun Dhá Leath Glais, which lies within Lecale Upper.

Brigid of Kildare's relics were brought to Downpatrick for safekeeping from Danish plunderers in 835 and the bones of St Columba were brought here from Iona in 877.[8] The frequent burning of Downpatrick caused them to be buried in the abbey yard and the site was forgotten about until 1185.[9] Upon rediscovery John de Courcy had them reinstated in a tomb within the abbey on 9 June 1186 by Cardinal Vivian.

The abbey was desecrated by Lord Leonard Grey in 1538 and he was executed three years later for his actions. It appears that the relics of the saints remained intact until 1790 when the building was being remodelled as Down Cathedral. Accounts given record that the tomb was opened and the relics disposed of, scattered over the abbey yard (prompting the Downpatrick people hurriedly to bury them at their present site).

It is said that the town cross was placed on the grave but it was carried off and vandalised. The Belfast Naturalists' Field Club erected the large granite slab over the grave in 1900 to protect the grave as it had become customary for those leaving Ireland to take soil from the grave with them.

The Earls of Kildare formerly held control of the customs of Stangford and Ardglass, both in Lecale Lower, of which it is noted that:

"The port offered excellent sea communications and the fertile area of Lecale was prosperous, so de Courcey incorporated the whole as part of the Pale and rewarded his followers with grants of land. Later, Henry VIII granted the revenue of the port, amounting to £5,000, to Gerald Fitzgerald, Earl of Kildare. The association of the Kildare family with Ardglass continued for three centuries"

Lecale is also recorded under the name of "Ladcathel" as one of the seven counties of the Earldom of Ulster in 1333. It was also the name of a former barony of the county, which by 1851 had been split into Lecale Lower and Lecale Upper.[2]

The Russells of Downpatrick have been established in Lecale since the 12th century having been recorded in the area since Osberto Russell accompanied John de Courcy in 1177 into Ulster.[11] Thomas Russell, one of the leaders of the United Irishmen who led the rising of 1803, was imprisoned in Downpatrick gaol and on 21 October 1803 was hanged at the gate of the gaol. 'The Man From God Knows Where' is a ballad written by Florence Wilson in commemoration of him.

Until 1745, when the first sea barriers were constructed by Edward Southwell, the sea encircled almost the whole of the area. This action saw the creation of the River Quoile and 500 acres of land around Downpatrick. Strangford Lough bounds the northern edge and the Irish Sea the east and Dundrum inner bay forms the western edge.

The soils are mostly light-medium loams, well suited for the production of grain, and it forms one of the most extensively cultivated areas of Northern Ireland. This was also the case historically. Ordnance Survey memoirs of 1833 to 1837 state that in some parishes, such as Dunsfort and Ballee, the land was almost exclusively used for cultivation, rather than grazing. The low livestock density meant that marl and lime was often used instead of manure. Arthur Young observed that the area was almost completely under grain cultivation (largely barley) during the late 18th century and that south Lecale was more fertile than the north.[12]

In 1967, an area of 7,680 acres of the Lecale Peninsula, between the Mourne Mountains and Strangford Lough, was designated as the 'Lecale Coast Area of Outstanding Natural Beauty'.[13]